From CO2Science: Despite plenty of evidence to the contrary (see the many reviews CO2Science has posted in their Subject Index under the topic of Peatlands), many climate alarmists are convinced rising temperatures will cause peatlands to release much of their stored carbon back to the atmosphere in the form of CO2, thereby providing a strong positive feedback to anthropogenic CO2-induced global warming. The latest study indicating otherwise comes from Malhotra et al. (2020).

Working in an ombrotrophic peatland in northern Minnesota, the researchers examined ecosystem fine-root growth responses to elevated CO2 and warming of up to 9°C above ambient over the four-year period 2014-2017. In 2014, the researchers installed large open-top enclosures and began a series of belowground warming treatments (to 2-m depth), where temperatures were maintained at plus 0.0, 2.25, 4.5, 6.75 or 9 °C above ambient. In 2015, the warming treatments were expanded to the aboveground air. Finally, in 2016, CO2 concentration was added as an experimental variable, with two values utilized (control at around 400 ppm and elevated at 900 ppm). During each year of the study Malhotra et al. performed measurements to assess fine-root growth responses to the different treatments. And what did those measurements reveal?

As highlighted in the relationships shown in Figure 1 below, results of the study revealed “warming strongly increased fine-root growth by over an order of magnitude in the warmest treatment,” such that there was a “130% increase of fine root-length production for a degree increase in temperature.” In addition, they found “soil moisture was negatively correlated with fine-root growth, highlighting that drying of these typically water-saturated ecosystems can fuel a surprising burst in shrub belowground productivity,” which they say is one possible mechanism explaining the observed increase of shrub growth on northern peatlands.

Commenting on these observations Malhotra et al. write “this previously unrecognized mechanism sheds light on how peatland fine-root response to warming and drying could be strong and rapid.” More importantly, they demonstrate the unlikelihood of a rapid decay and return of peatland carbon back to the atmosphere in response to rising temperatures, which observation directly contrasts with the alarmist prediction that it will. 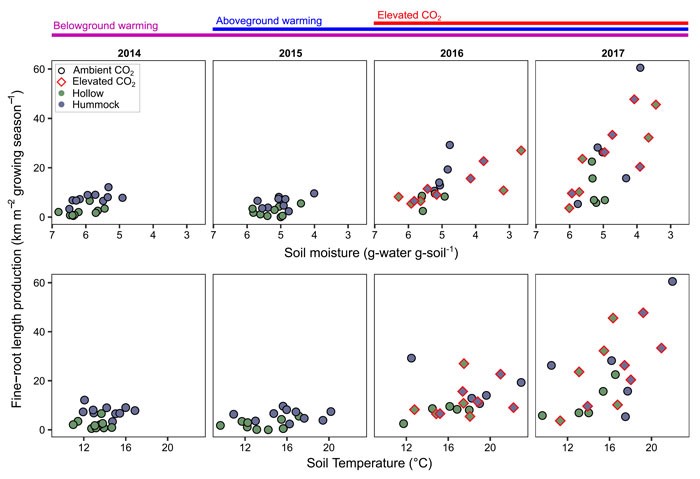 Figure 1. Plot-scale responses of fine-root growth to warming and drying conditions during the growing seasons of 2014-2017 of an ombrotrophic peatland in northern Minnesota. Data are summed across plant functional types for hummocks and hollows. Different experimental treatments were added in each year as indicated by the bars at the top of the figure (belowground warming in 2014, aboveground warming in 2015, elevated CO2 in 2016). Fine-root growth was measured between June and October and represents the growing season. Soil temperatures represent averages of hourly measurements at 10-cm depth during the growing season. Soil moisture was obtained from gravimetric moisture content measurements made on collected ingrowth core peat. Note that the x axes in the soil moisture panels range from wetter to drier conditions from left to right. Growth trends were similar for biomass production and length production. Adapted from Malhotra et al. (2020).