Whatever it is, it's climate change

Here at CDN we are very fond of the Great Lakes, partly because we did a video on the inconsistent post-facto predictions alarmists make and also, less polemically, because one of us grew up on the shores of one of them, and spent an entire summer clearing a beach only to have it vanish beneath the waves due to lack of climate change and never return. But now we’re told that beaches are appearing, vanishing and appearing again because climate change is causing lake levels to fluctuate, as if they never did before, and fill up permanently, even though the opposite was predicted. Thanks for that one.

According to a piece in Physics Today, “The Great Lakes are filled to their brims, with no signs of receding”. Which is already rubbish since the lakes have no brims; it’s just a wildly off metaphor that conjures up images of looming disaster as they overflow and all the water goes… next to the existing water, the usual procedure when lake levels rise. Then the piece says “Water levels have always fluctuated on the Great Lakes, but the recent extreme seesawing, particularly on the upper lakes—Superior, Michigan, and Huron—is unprecedented in the century that records have been kept (see charts).” And along with Dave Middleton we invite you to, indeed, “see charts” because if you do you’ll surmise, along with him, that the “unprecedented” in the headline was a typo.

Here are the charts, courtesy (or discourtesy) of Physics Today: 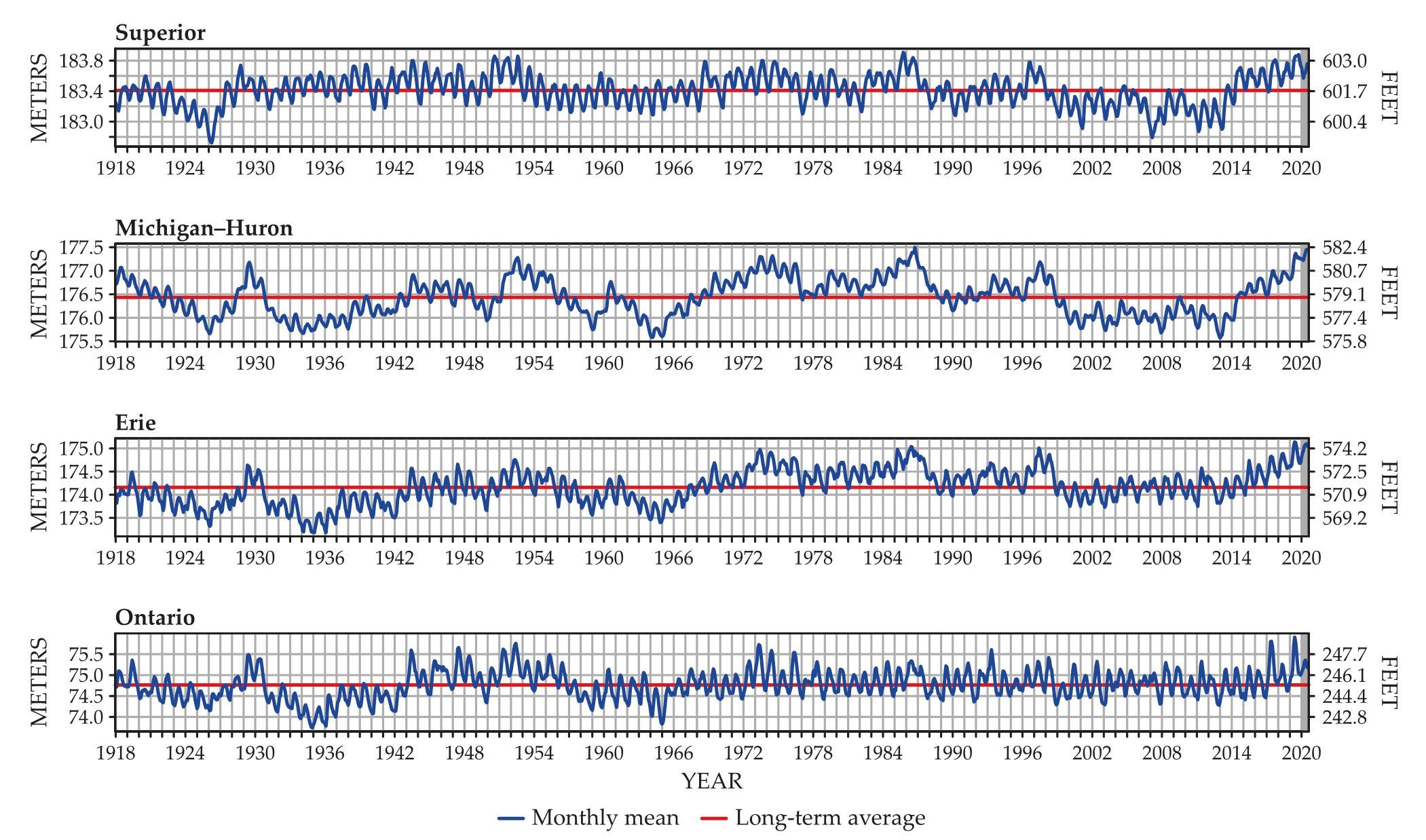 See? Nothing unprecedented, about levels or about fluctuations. But it gets worse.

As we point out in our video, when the lakes’ water levels were falling in the late 1990s, it was confidently and unambiguously blamed on climate change and portrayed as a disastrous portent of a long term trend. In 1996: “The potential impacts of climate change are significant… The warmer air temperatures and higher rate of evaporation and evapotranspiration increases moisture loss, decreases runoff, and leads to a decline in lake levels.” In 2000: “The warming effects of climate change pose more of a threat to the Great Lakes than commercial water exports, says Environment Minister David Anderson… Computerized climate models show lake levels could fall by one metre or more over the next 50 years.” In 2007: “Global warming may drop Great Lakes water levels” “Water levels could take a big drop as the Earth gets hotter”. And in 2009: “Big climate change headed Michigan’s way, study says. State could see warmer temps, lower lake levels”.

Get the idea? But wait. There’s more. In 2013: “Great Lakes Michigan and Huron set a new record low water level for the month of December, and in the coming weeks they could experience their lowest water levels ever. It’s becoming certain that, like the rest of the country, the Great Lakes are feeling the effects of climate change.” In 2017: “Rising temperatures could lower water levels in the lakes, intensify harmful algal blooms and threaten fish and wildlife.”

And… in 2020 “We want to get the politicians to understand that [high water] may be permanent with climate change,” says Wilson. “Then where do we go? The cities will flood.”

If you’re wondering who “Wilson” is, he’s a guy whose son got married on a Lake Michigan beach that’s now submerged. So there you have it. And while the text of the articles suggests there’s a great deal of complexity to the patterns of precipitation, evaporation and drainage, the second headline says it all: “Experts see the fingerprints of climate change on the lakes’ record high water levels.”

Previous PostBut if it's a science...
Next PostIf only it had warmed