Eurasian snowfall trends of the past two decades

From CO2Science: If global warming is getting worse like alarmists contend, then signs of its predicted effects should be evident all across the globe, including data on snow cover. With respect to this particular climatological parameter, it is expected that snow cover should be declining as rising temperatures result in less precipitation falling as snow and a warmer earth melts snow more rapidly than a colder earth. So, is this indeed happening as predicted?

A new paper published in the journal Remote Sensing sheds some important light on the topic. Authored by Sun et al. (2020), the work examines recent trends in snow cover data for a large portion of Eurasia, which land area accounts for nearly two thirds of the total snow-covered area of the Northern Hemisphere in winter. Data analyzed for the study included both remotely-sensed images of snow from moderate resolution imaging spectroradiometers (MODIS) aboard satellites and snow data obtained from 1,393 ground observation stations across the study area over the period 2000 through 2016.

In describing their findings, Sun et al. report "the variation in snow phenology in the large part of Eurasia is spatially heterogeneous," with some regions showing increasing trends, some showing decreasing trends, with the large majority of the area showing no significant trends. Nevertheless, despite some regional differences, for the entire region the authors determined "there are no significant positive or negative interannual trends of snow cover extent from 2000 to 2016" (see Figure 1). Thus, for an area that accounts for 61.3% of the total land area of Eurasia, the authors of this study found there has been no change in snow cover over the 17 years analyzed. And that observation is a pretty damning indictment of climate alarmist predictions of snow cover response to that CO2-induced global warming.

Alarmists are quick to claim snowfall is fast becoming an extinct event, rarely to be witnessed or seen because of global warming. Based on the data presented by Sun et al., they had better get their eyes checked, it hasn't gone anywhere of late! 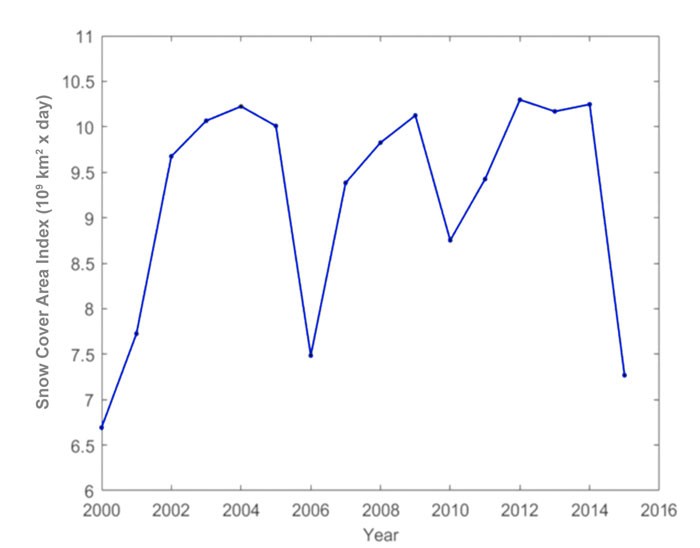 Previous PostHow dangerous (or uncommon) is a temperature rise of 2° C above preindustrial values?
Next PostExperts say