From CO2Science: Noting that “forest fires are a serious environmental hazard in southern Europe,” Turco et al. (2016) write that “quantitative assessment of recent trends in fire statistics is important for assessing the possible shifts induced by climate and other environmental/socioeconomic changes in this area.” And, therefore, they go on to describe how they analyzed “recent fire trends in Portugal, Spain, southern France, Italy and Greece, building on a homogenized fire database integrating official fire statistics provided by several national/EU agencies.” And what did they learn by so doing?

The nine researchers -- hailing from Greece, Italy and Spain -- report that (1) “during the period 1985-2011, the total annual burned area (BA) displayed a general decreasing trend” (see figure below), that (2) “BA decreased by about 3020 km2 over the 27-year-long study period (i.e. about -66% of the mean historical value),” that (3) “these results are consistent with those obtained on longer time scales when data were available,” and that (4) “similar overall results were found for the annual number of fires (NF), which globally decreased by about 12,600 in the study period (about -59%).” 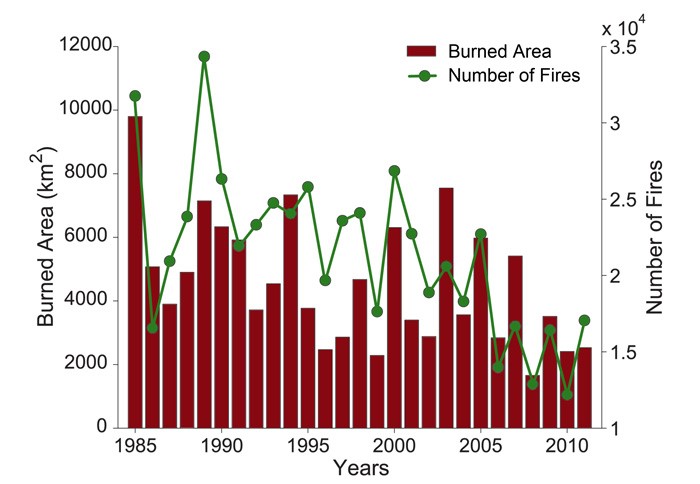 In light of these several findings, therefore, as well as the many others discussed under the heading of Fire (Relationship to Global Warming) in the CO2Science Subject Index, it is becoming ever more clear, as noted there, that “there is little support for the model-based contention that future CO2-induced global warming (if it occurs at all) will have any effect on global fire trends.”

One comment on “Mediterranean Europe's fire history: Getting better or worse?”