From CO2Science: Further on the theme of the previous article, multiple studies have confirmed that global gross primary productivity (GPP, i.e. growth of plant mass) has been increasing in recent decades (reviews of several such studies can be found by following this link). This key measure of ecosystem health has shown that the terrestrial biosphere today is more productive in terms of its ability to produce biomass (plant growth) and support higher trophic levels up the food chain than it was two, three, five, or even ten decades ago. The latest research study to confirm as much comes from the recent study of Schwalm et al. (2020) which not only confirms the long term upward trend in GPP but also confirms that it is primarily due to rising CO2 levels.

Writing in the professional journal Scientific Reports, the team of seven U.S. scientists employed a series of 11 offline and 13 fully coupled state-of-the-art Earth system models to reconstruct historical trends in GPP over the period 1901 to 2010. Further they quantified the relative importance of several key drivers impacting the historic change in GPP, including CO2 fertilization, nitrogen (N) deposition, climate change, and changes in land cover/land use. The key findings are illustrated in the three figures below.

Schwalm et al. report there has been a significant long-term increase in mean annual global GPP of 10.5 Pg C per year (calculated as the difference between the periods 1981-2010 and 1901-1930), which increase is equivalent to approximately 9% of the present value of total annual GPP (~119 Pg C per year). The spatial distribution of the trends, shown in Figure 1, reveals the greatest GPP enhancements have occurred in the tropics and the eastern mid-latitudes of North America.

Analysis of the chief factors responsible for this incredible increase in GPP reveal the ongoing rise in atmospheric CO2 occupies the top spot (lower panel of Figure 1). In this regard, calculations by the authors show the magnitude of the CO2 fertilization effect increased fivefold since 1901 to a value that is presently equivalent to 17% of contemporary global GPP (Figure 2). Nitrogen deposition came in second with its present influence on GPP amounting to a value that is approximately 9% of current annual GPP (see Figure 2). Land use/land cover changes, in contrast, exerted a modest negative impact on GPP presently equivalent to about 1% of modern GPP (also see Figure 2). And not shown in Figure 2 is the influence of climate (temperature, precipitation and radiation effects), which the authors report is positive (enhancing GPP) and about the same magnitude (1%) of the present-day influence of land use/land cover (but opposite in sign).

Lastly, Figure 3 presents a spatial view of the dominant controlling factors of GPP. Not surprisingly, it is found that CO2 fertilization is the principal influence across 58% of the vegetative land surface, followed by changes in climate and land use/land cover, which both dominate GPP trends over approximately 15% of the land area. Nitrogen deposition, on the other hand, is the least influential spatial driver of GPP trends, dominating in only a mere 4% of the land surface.

In considering all of the above, it is clear that fears of a soon-to-be-collapsing terrestrial biosphere are vastly overstated. Rather than declining in vigor as so many climate alarmists falsely claim, the world’s land vegetation is increasing its robustness, and has been doing so for over at least the past eleven decades.

Ironically, the reason for that enhancement is the very action climate alarmists claim should be decimating it: humanity’s increasing use of fossil fuels.

The combustion of fossil fuels is the principal driver of the contemporary increase witnessed in both atmospheric CO2 and nitrogen deposition. And, if you believe the climate alarmists that rising CO2 is the sole cause of modern warming, well, you can add the positive effects from a warming climate to CO2 and nitrogen deposition as an attributable factor driving the positive trends in GPP.

Humanity and nature should therefore be thankful for the use of fossil fuels instead of demonizing it as so many climate alarmists do. They couldn’t be more misguided. 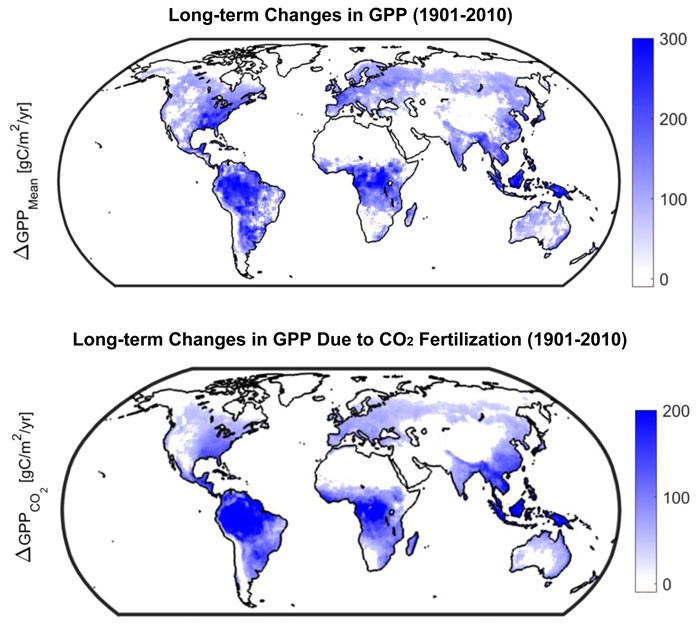 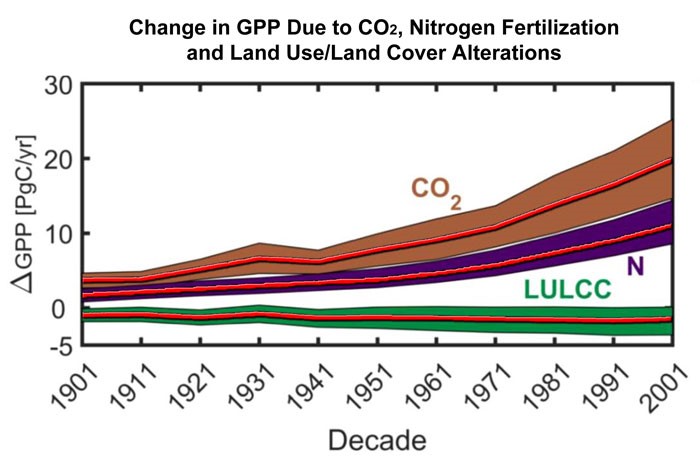 Previous PostRecent Greening Trends in the Grasslands of the Northern Great Plains
Next PostThis just in: CO2 doesn't drive temperature