One of the strange things about the claim that CO2 is the “Principal Control Knob Governing Earth’s Temperature” is that except for a brief period in the latter part of the 20th century there is no evidence for it at all. This conviction has swept through our political and cultural elites and is the basis of the entire panic over man-made warming. But it just suffered another serious blow in the form of this reconstruction of paleo-climate temperature and atmospheric CO2 by Dr. Horst-Joachim Lüdecke of EIKE (the Europäisches Institut für Klima & Energie) that shows that there’s just no long-term connection between CO2 and temperature. 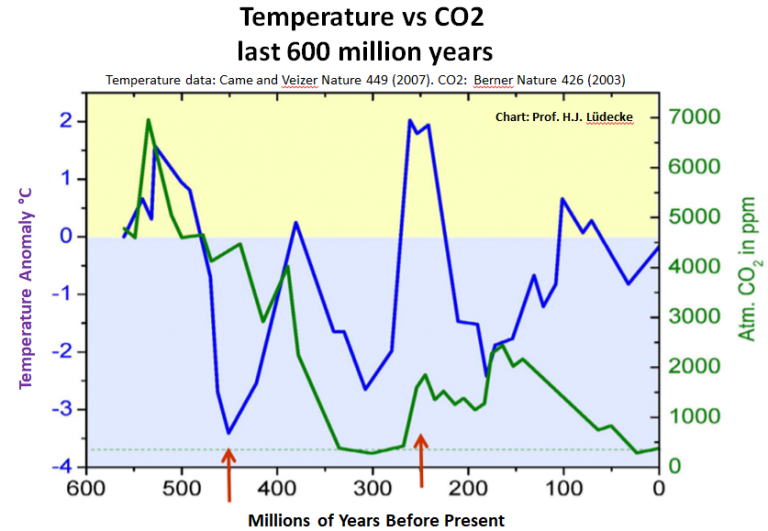 The data on which this chart is based are not themselves new. And of course when it comes to affairs on the planet Earth millions and especially hundreds of million years ago a certain degree of caution is required about reconstructions. For all their commendable ingenuity, we must not forget that they rest on a complex chain of assumptions; nobody is hopping into the Tardis, going back to the Carboniferous period and sticking a test tube out the window. But precisely because this data was calculated more than a decade ago, and the two series were generated independently, it seems to us to pose a pointed question for alarmists: Where’s your link between CO2 and temperature? And if there isn’t one over 550 million years, what permits you to assert that it suddenly appeared 50 years ago? Is it not a bedrock principle of science that physical laws do not change over time?

One could make the same point on any time-scale you care to name. And in fact Willis Eschenbach does with respect to new ice-core data from the Alps going back to 800, observing that the record clearly shows dramatic temperature swings over short periods, for instance a 2.3°C increase between 850 and 885 (which, we note, nobody would dare blame on the relaxing of methane restrictions by Lothair I) and a drop of the same amount between 1190 and 1240. As he says, “on a planet with naturally occurring warmings of e.g. over two degrees C in 35 years from 850 to 885, I’m not seeing how people can possibly rule out such natural swings in looking at the relatively featureless and certainly in no way anomalous modern record.”

The way they do it seems to be by ignoring such inconvenient truths. They just say the signal emerges from the noise around 1970, the models are accurate and the science is settled, and brush aside all that went before. Despite occasional lurches in the direction of European colonization having caused reforestation of the New World, a dramatic drop in atmospheric CO2 and the Little Ice Age, they essentially make no effort to reconstruct temperature and CO2 over the past 1000 years, the past 10,000, the past million, the past 50 million or any other such scale and demonstrate even a correlation let alone causation. Or even the last 250 years or even the last 100.

You’d think it would be an issue. But when you ask alarmists what they have to say about it, you get back silence or smugness if you’re lucky or abuse if you’re not.

For instance, they may dismiss EIKE as a “denier” outfit given their slogan “Nicht das Klima ist bedroht, sondern unsere Freiheit!” But there is something circular about excluding from the discussion anyone who examines and rejects alarmist claims and then say nobody in the debate does so. And also something very much beside the point, even underhanded.

If the data is wrong, show us the correct data. Show us how atmospheric CO2 contributed to the Hirnantian glaciation during the Ordovician (first red arrow on the chart), rising temperatures during the Cretaceous, the sad extinction of the woolly rhino some 15,000 years ago that a new study blames on rising temperature not overhunting or, well, anything. Tell us why there’s massive warming in the Permian to which CO2 responds belatedly if indeed it’s a response at all.

Otherwise a cute graphic showing CO2 as a thermostat is no match for data about the lack of connection in the real world over a sufficiently long period of time to screen out noise and show whatever signal is there. Or isn’t.

2 comments on “This just in: CO2 doesn't drive temperature”