The rain in the Amazon falls mainly at random

Further on the subject of rainfall, a new study has been published (h/t CO2 Science) that uses tree-ring widths from Spanish cedar trees in the equatorial Amazon to extend rainfall records back to the late 1700s. Remember the Amazon? The one that’s drying out and burning up due to climate change? Once again, the data, when we finally get it, is pretty much self-explanatory. There’s a lot of variability in the record, but no trend. 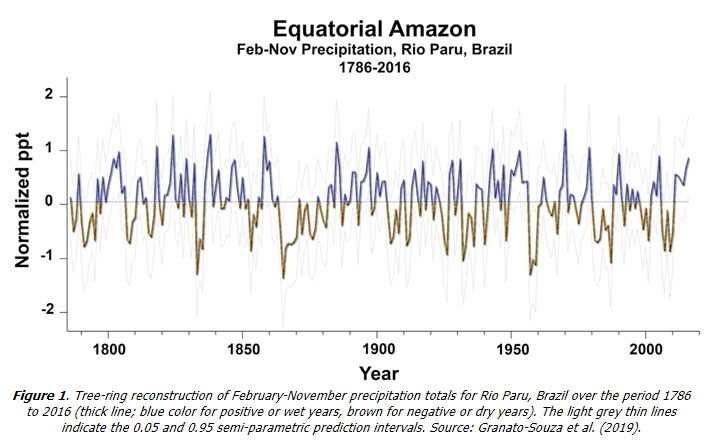 The chart shows an index based on the precipitation proxy for the wet season (February through November), constructed so a positive number refers to a wet interval and a negative number refers to a dry interval. From 1786 to 2016 the record shows lots of both, back and forth, sometimes (like in the late 1800s) a stretch of dry seasons, sometimes a stretch of wet seasons, but no trend. Whatever your prediction of the effect of global warming on Amazon rainfall, unless you predict no change, the numbers won’t support you.

Previous Post1919 or 2019? Back to Ranfurly
Next PostEven a global recession hasn't slowed CO2 growth