January was supposedly the hottest January ever and we’re all going to die according to reputable American governmental science agencies like NOAA even under Trump. Which did say it and it got a lot of press. But NOAA is doing some very dubious science here, since the only place in the world showing unusual warmth is Siberia, suspiciously in the same places where they record local temperatures near the giant distributed steam heating plants. It’s Russian collusion all over again. О, черт.

No really. As Anthony Watts exposes, “The January 2020 Climate Assessment Report, released by NOAA’s National Center for Environmental Information (NCEI), was accompanied by a map showing a giant red menace of extraordinary asserted warmth extending from the Russian border with Poland well into Siberia. Yet, the asserted hot spot appears nowhere else.” 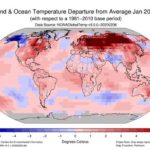 The United States, which has the best measurements along with Britain, had a perfectly normal January, nowhere close to a record. As Watts says, it’s all on the Siberian heat wave or, more exactly, the Siberian not quite as hideously cold as usual in midwinter wave. Which didn’t happen.

At least there’s no good reason to think it did. When you get one of those lovely red and blue maps of global temperature showing that we’re all going to die it’s liable to conjure up images of a vast network of extremely sophisticated, densely packed sensors, possibly waaaaay up in space, and scientists scrutinizing them carefully for any possible distortion. If so, shoo them away.

The problem, as Watts explains, is that in large parts of Russia they still heat homes in a hideously inefficient and obsolete manner, by generating steam in a big central power plant then piping it into to homes to run those noisy radiators your grandparents might have had in a Western country. Of course a lot of heat is wasted in the process, as the transmission pipes radiate it out into the streets of towns and cities. The streets where… wait for it… the thermometers are located.

OK, that situation is not the problem. It’s just a defect in the data. The problem is that even an agency like NOAA, many of whose members must know there’s something fishy about this Siberian temperature anomaly, are now all-in on man-made climate change and instead of doing the scientific thing where you go oh that’s weird and try to figure out why, do the political thing and yell aaaaaah hottest ever we’re all going to dieeeeeeee!!!!!!!!

Like the cultists proclaiming the end of the world, such alarmists have a problem. The stuff they keep predicting keeps not happening. People looking out their window don’t see the hottest January ever or the end of winter. (Even Hydro Ottawa was just earnestly touting the fun opportunities presented by “our months of low temperatures and abundant snow”.) The polar bears stubbornly don’t die and the penguins that are now apparently taking their place in the tumbril instead aren’t going to either. And at some point it just turns into noise or the comic spectacle of the guy with the sandwich board saying “The world will end on” and then he keeps having to X out the date and write a new one.

If global warming is real, man-made or otherwise, there’s no need for this kind of statistical obtuseness or the jiggery-pokery that adjusts past temperatures downward, always downward, to “correct” for anomalies that always seem to point in the same direction. And if these things are needed to continue to sound alarms, it means there’s something very wrong with the theory. And, though we regret having to say it, the scientists who know it and don’t speak out.

It’s bad for policy and the credibility of governments. And it’s bad for science.

2 comments on “Sweltering in Siberia”