MSN reports that satellite photos show a dramatic reduction in the smog blanketing China as “Wuhan virus” shuts down large portions of its economy. Indeed, in time-lapse images one can watch the skies clearing first over Wuhan then spreading. But if you took longer time-lapse images of Western cities, you’d see the smog clearing over the 20th century because of economic growth rather than a precipitous tumble back into abject poverty.

It is because of having sufficient wealth to care about the environment, and do something rational about it, that London no longer has the infamous “pea-soup” fogs 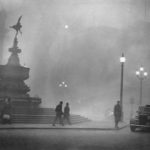 whose last lethal visit was in the early 1950s.

At which time the Optimists Club of Los Angeles met wearing gas masks. 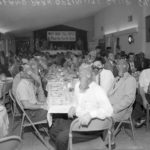 So here’s the deal. We can reduce emissions by destroying our economy, with all the terrible costs involved, or by improving it, with all the gains involved. Guess which we advocate.

Previous PostWuhan to the... rescue?
Next PostThe nuclear option