Exactly the same as it wasn't

Here comes the melting Antarctic again. No really. Three authors on The Conversation say that there was a massive sea level rise due to melting Antarctic ice 129,000 years ago and it could happen again. Which is again a classic piece of alarmist prediction after the fact, because it already did happen again 15,000 years ago. See, the time period they cherry-picked was the penultimate abrupt retreat of the glaciers when there was a big melt. As there was in the last one.

This time we’re all going to die because “We found that the mass melting of the West Antarctic Ice Sheet was a major cause of high sea levels during a period known as the Last Interglacial (129,000-116,000 years ago). The extreme ice loss caused more than three metres of average global sea level rise – and worryingly, it took less than 2˚C of ocean warming for it to occur.” Oh really? Yes really. “We first looked at the fine layers of volcanic ash in the ice to pinpoint when the mass melting took place. Alarmingly, the results showed that most ice loss happened at the start of Last Interglacial warming, some 129,000 years ago – showing how sensitive the Antarctic is to higher temperatures.”

What rubbish. We know perfectly well that for the last 2.5 million years we’ve been in the Pleistocene “ice age”, defined as a period with significant polar ice. And we know perfectly well that during this ice age there have been a complex and perplexing series of brief interglacials and long glaciations both of which tend to start and stop with unsettling suddenness. And that when a glaciation ends a lot of ice melts. (Hence it is hard not to wince at the authors’ revelation that at the start of the Eemian “a period of sustained ice loss over thousands of years…. coincides with extreme sea level rise, suggesting rapid ice melt from the West Antarctic Ice Sheet.” Duh.) 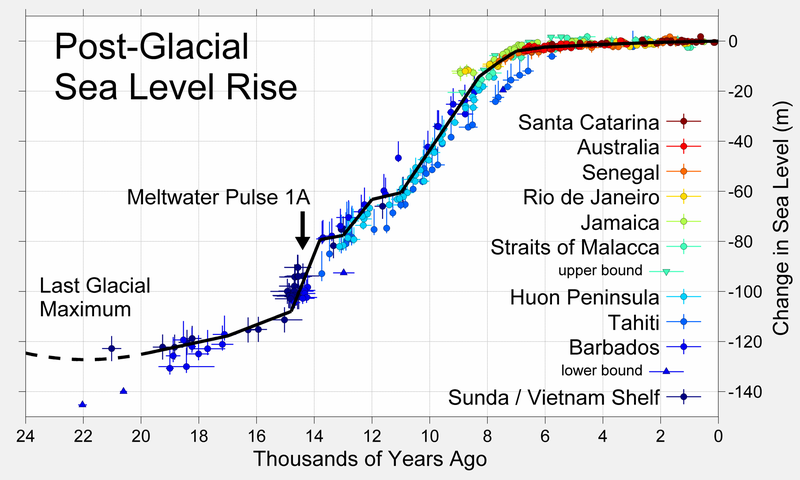 Image courtesy of Robert A. Rohde

In this newsletter we have repeatedly pointed to this graph showing a rapid sea level rise in the initial part of the Holocene. Forget three metres. We’re talking 30 metres over about 1,000 years from 13,000 to 12,000 BC. Followed by another 80 metres over the next 7500 years.

Now the Eemian is an unwelcome guest at the global warming banquet because it is rather uncontroversially agreed to have been warmer than today, by somewhere between 1˚ and 2˚ C, even though atmospheric CO2, the “Control Knob Governing Earth’s Temperature”, was at about 280 ppm—more than 120 ppm lower than today. Also like the current Holocene interglacial, the Eemian seems to have hit peak warmth early, around 5,000 years in, and then cycled gradually down into another life-threatening, extended glaciation. And finally, if the Holocene lasts as long as the Eemian, we’re in a heap of trouble because the former ended after 15,000 years and the initial big Holocene melt was… oh dear. Just about 15,000 years ago.

Anyway, a surge in sea levels at the beginning of the last interglacial tells us nothing about what’s likely to happen toward the end of the current one, and nothing we didn’t know about what did happen near its beginning.

Apart from those minor details, a superb piece of analysis.