Your credibility is on fire

Back in May the CBC informed us the climate experts were predicting B.C. was in for an abnormally hot and dry summer of constant wildfires. Instead, as the CBC reported on August 31, the province saw “unexpectedly mild” weather with lots of rain and few fires. But not to worry. Those are just facts. The theory remains intact, as does the experts’ confidence in their models. The public broadcaster assured us that “the short-term respite doesn’t reflect long-term worsening conditions”. Faith being, of course, “the evidence of things not seen.”

It’s not obvious whether climate alarmists or religious people should be more annoyed by comparisons between global warming and dogma. But a major problem with the theory of man-made climate change is that it’s not a theory at all. It’s dogma in the worst sense of the term.

Theories have an “if-then” form and are vulnerable to refutation if their predictions fail to materialize. Which they definitely did here: As the CBC admitted at the end of the summer, possibly after looking out the window, “Last year wildfires ravaged 1.3 million hectares. So far this year, they have only burned 21,310.”

Um yeah, that number’s down a bit. Though only by a factor of 60. The number of fires is down by two-thirds and the amount the province spent fighting them by over 80%. “B.C. Wildfire Service spokesperson Kevin Skrepnek says those numbers are all because of rain.” Really. Rain? Oh dear. And you told us climate change meant drought.

Well, that or flooding. Or heat or cold. Or whatever just happened or, in the case of walruses plunging off a cliff, whatever we just invented. So how are we meant to refute the theory if anything and everything confirms it after the fact even if the fact is untrue? Well, we’re not. Because when it comes to climate change dogma, the crucial thing is never to doubt.

Thus the guy the CBC quoted back in May, “B.C.-based fire ecologist Bob Gray”, is back in August. “Gray, the fire ecologist, says it's unlikely B.C. will experience any major fires in the next few months. But he warns that if those forest fuels don't burn this fall, they could make for an explosive wildfire season next year. The long-term trend, he says, is an occasional wet summer like the one B.C. just had, but overall more hot and dry seasons like those in 2017 and 2018. "Primarily what the models are suggesting, and what's proven out in the last two decades, is there's an upward trend in terms [of] fire behaviour and fire seasons," Gray said.” The models again. What about the evidence?

According to the National Forestry Database, it’s a mixed picture: fewer fires per year but, in the last two years, more area burned. Is this what anyone predicted? And is anyone willing to make a prediction for the future? 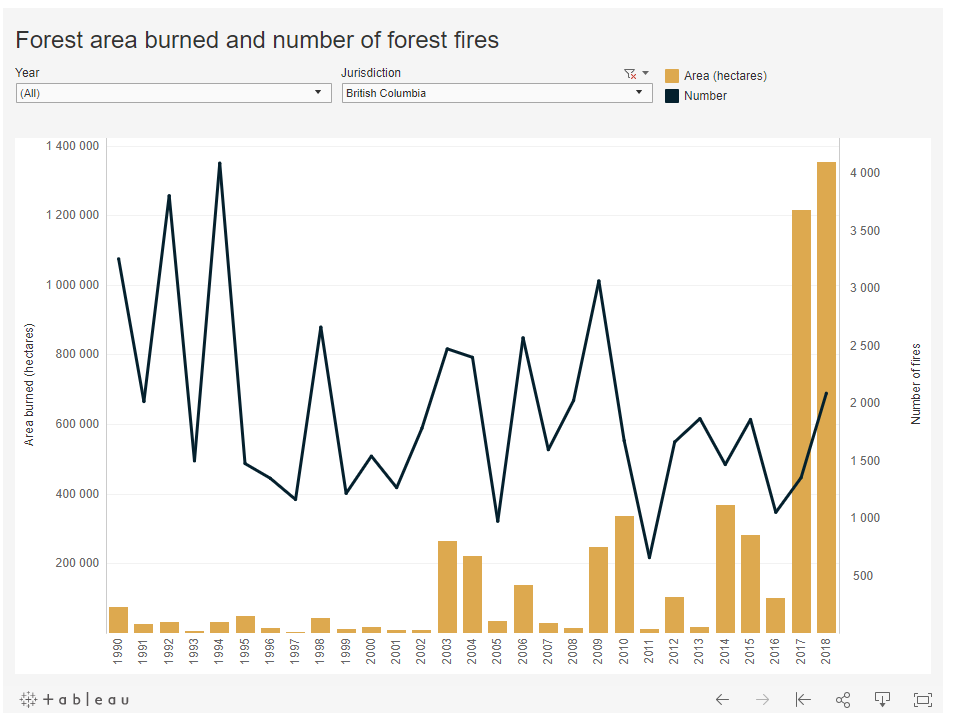 The CBC gives what could be a prediction. It goes on to quote Gray that " let's take advantage of this down year, get a lot of good work done and be prepared for the future, which is unfortunately more fire."

We shall see. But it’s only a real prediction if it gets checked against the facts going forward and if it doesn’t come true appropriate conclusions are drawn about the theory.

If not, and it continues to hype warming, maybe as well as looking out the window the CBC should look in the mirror.

Previous PostThere's a carbon cycle?
Next PostGlowing in the dark