The hydroclimate of the upper North Saskatchewan River Basin

From the CO2Science archive: The authors write that “a growing demand for the surface water resources of the Canadian Prairie Provinces has resulted in increasing vulnerability to hydrological drought,” citing the studies of Schindler and Donahue (2006) and Wheaton et al. (2008); and they further note, in this regard, that “a shift in the amount and timing of streamflow represents the most serious risk from recent and projected climate warming in western Canada (Sauchyn et al., 2010),” adding that “the Saskatchewan River Basin is among Canada’s most vulnerable watersheds, in terms of projected climate changes and impacts, and the sensitivity of natural systems and economic activities to Canada’s most variable hydroclimate.” Hence, it is important to know the characteristics of past streamflow variability in order to better prepare for future droughts, as well as to determine if extreme droughts that may occur in the future might possibly be attributable to CO2-induced global warming or if they are within the range of natural variability experienced in the past, when the air’s CO2 concentration was both much lower and less variable than it is currently. And so the question arises: Is a mere century of real-world data sufficient for these purposes?

What was done: In a study designed to explore this important question by determining if streamflow variability recorded by the streamflow gauge at Edmonton, Alberta (Canada) over the past century (since 1912) is representative of the range of variability experienced there over the past millennium, Sauchyn et al. (2011) developed a 945-year reconstruction of the annual flow of the Northern Saskatchewan River based on tree-rings collected from seven different sites within the runoff-generating upper basin of the river (see figure below). 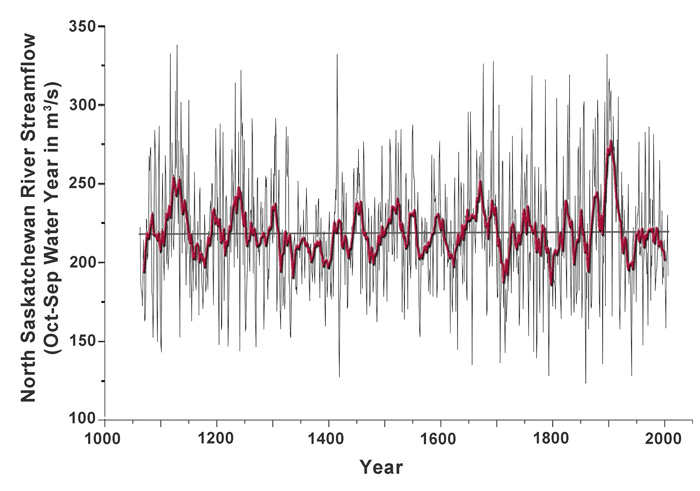 What was learned: Simply put, as the three Canadian researchers state, the Edmonton stream-gauge record does not “represent the full extent of interannual to multidecadal variability in the tree-ring data,” as “there are periods of low flow in the pre-instrumental record that are longer and more severe than those recorded by the gauge” and which “pre-date Euro-Canadian settlement of the region.” Two of these extreme events were approximate 30-year droughts, one occurring in the early 1700s and another during the mid-1100s, while one of the two most prominent mega-droughts lasted for most of the 14th century, while the other occurred in the latter part of the 15th century.

What it means: Sauchyn et al. (2011) state that “there is less certainty and stationarity in western [Canadian] water supplies than implied by the instrumental record,” which they say is “the conventional basis for water resource management and planning” of the region. Likewise, it is clear that their streamflow reconstruction provides a whole new-and-improved basis for determining the “uniqueness” of whatever future droughts might occur throughout the region, making it much more difficult for climate alarmists to claim that such droughts were caused by anthropogenic CO2 emissions, since there was far less CO2 in earth’s atmosphere prior to the 1912 start-date of the region’s prior streamflow history, when several way more serious droughts than those of the past century are now known to have occurred.

Previous PostEverybody knows: BC droughts are worse than ever
Next PostTime runs backward, no glacier at 2050