Everybody knows: the coral reefs are dying off

And you know what’s causing it. In late 2021 the UN asked “Why are coral reefs dying?” Then, having of course blamed climate change, it warned that “A 70-90 per cent decrease in live coral on reefs by 2050 may occur without drastic action to limit global warming to 1.5° C.” Earlier in 2021 NPR had a kids-won’t-know-what-snow-is moment only with coral, declaring “Fearing Their Kids Will Inherit Dead Coral Reefs, Scientists Are Urging Bold Action.” And in late 2020 the BBC announced the Great Barrier Reef had lost half its coral since 1995 “due to warmer seas driven by climate change”. Everybody knows global warming is killing the coral reefs. But let’s dive in and see for ourselves.

According to the Australian Institute of Marine Science the last few years have been a great time to be alive if you happen to be coral. In all three regions, the Great Barrier Reef is growing like gangbusters and has reached record high coverage:

The way the data are broken down hides the overall effect. Marine scientist Peter Ridd added the series up to show the total coverage: 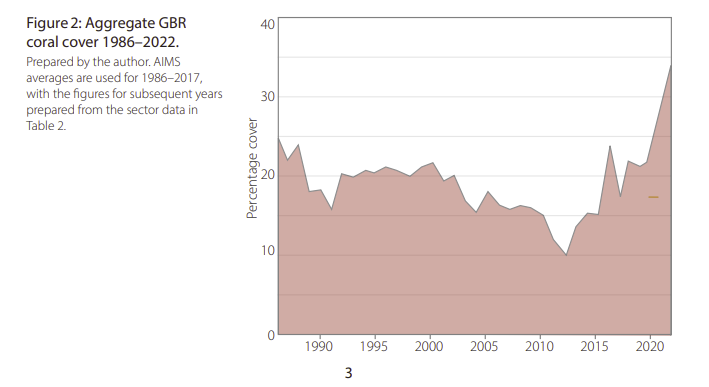 Sure, if you say so. Because everybody knows the surest sign of a dying coral reef is it growing to record size.

Feel free to send us tips for our “Everybody knows” series (with story links please) to admin@climatedn.com.

One comment on “Everybody knows: the coral reefs are dying off”