It’s all fun and games until someone loses their purchasing power. As the Telegraph just noted, “Bank of England told to ditch green obsession as prices surge”. To give you an idea of the problem, we searched the BoE website on June 10 and got 557 hits for “climate change” while “inflation” got 6,844. And you might think, at least they’re mostly focused on the right thing. Except those 557 hits aren’t warnings about how their obsession with fighting climate change by making energy unaffordable is contributing to the problem they’re supposed to be trying to solve. But far far worse is the Reserve Bank of Australia, where our search for “climate change” yielded 9,856 hits whereas “inflation” got a mere 4,978. Does anyone still do the job they were hired to do? 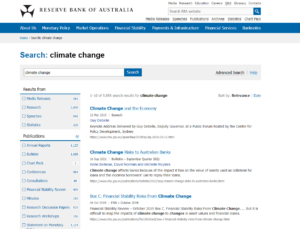 If you were a central banker, you’d think you’d have had enough on your plate just worrying about things like failing mortgages, or the stock market or fears of a recession. But no, what they really seem to want to talk about is global warming. At least they ought to be able to claim it’s a comparable threat, right? And yet, for all the gloom-mongering, even the green-obsessed Australian media has been forced to admit the climate emergency is a bust. “Despite floods, pandemic and economic hardship, one key Aussie industry is set to have its best season yet” and it’s… um… farming.

“Australia is expected to deliver its best summer crop on record despite a challenging year for farmers. An estimated yield of 5.5 million tonnes for 2021–22 will help overall agricultural exports surpass an expected $80bn for a second consecutive year…. Heavy rainfall across Queensland and northern NSW in the early part of 2022 added to excellent conditions throughout the summer. The rainfall was not without casualties however, with some farms hit by flooding, weather damage, harvest delays and, in some cases, the total loss of crops.”

Well duh. When’s the last time farmers didn’t complain about the weather? Too wet, too dry, too hot, too cold, low prices for crops, high prices for inputs, locusts and all that. (Hence the perhaps apocryphal story of Calvin Coolidge telling a delegation of farmers who rattled off all the usual complaints, “Better get religion”.)

Farmers aren’t the only ones complaining, but for others the problem isn’t climate, it’s climate policy. The BBC just ran a story “Landlady gives up pub as quarterly energy bills near £30,000” about one Miranda Richardson, whose Live and Let Live pub in Harpole, Northampton will be let die because its electricity bill alone had reached £20,000 every three months and “Unlike households, firms are not protected by an energy price cap.” Meanwhile the Daily Mail reported that “Britons on low incomes are being forced to sell their cars due to soaring petrol prices, the president of motoring group AA has warned”. (AA here being not Alcoholics Anonymous, although having Googled it we shudder to think what ads will now pop up at us for months to come, but rather “The AA (formerly The Automobile Association)… a British motoring association founded in 1905, which currently provides vehicle insurance, driving lessons, breakdown cover, loans, motoring advice, road maps and other services”.) And “It comes as the average cost of filling a typical family car with petrol has exceeded £100 for the first time” which if you’ve seen a typical family car in Britain and know how many pounds there are in a dollar will or should horrify you.

Especially if you are a central banker whose gaze, when it wanders from the rate of inflation that is currently 9% according to the BoE website, moves not to greener pastures but to other indications of a collapse in financial stability. Why, according to the Financial Times even the European parliament just saw a coalition of “socialist and far-right lawmakers” (there being of course no far-left ones even to a publication with that name nowadays) vote down a plan to toughen climate rules “as governments and industries deal with growing concern over inflation, including steep rises in energy costs.” And it’s also worth noting that Net Zero Watch recently had to rebuke the Bank of England for including as one of its climate obsessions a “climate stress test” for financial institutions whose underlying projection was even worse than the exploded RCP8.5.

BTW the Bank of Canada’s mission statement is impeccable: “We are Canada’s central bank. We work to preserve the value of money by keeping inflation low and stable.” And it had just 228 mentions of climate change and 2,826 for inflation. And over at “the Fed” in the United States the pledge “The Federal Reserve, the central bank of the United States, provides the nation with a safe, flexible, and stable monetary and financial system” is fine. And the climate change to inflation search hit ratio was a very healthy 190 and 16,235.

Even better. But it must be said that none of these institutions has managed to do anything about inflation… or climate change. So they do need to stick to their knitting and, on inflation, knit harder, faster and better.

Previous PostTwo thousand years of Chinese climate history: what it tells us
Next PostChortle

4 comments on “Wrong kind of green”