Awake because of woke science

Hank Green, popular co-star of Vlogbrothers, Crash Course and SciShow, has a new video on how climate change is robbing you of sleep. By which he does not mean the now de rigueur nervous breakdown over climate breakdown. He means that, and we are not making this up, new research says that the temperature outside your house affects how well you sleep. We are to take seriously the statement “We know that the temperature of a room can influence sleep, but these researchers wanted to see if the outside temperature can have similar effects.” Um yeah if the heat gets into your house. Then you can kiss 40 winks goodbye. You’ll be lucky to get 30. Or 8.5, if you get our drift.

The viewer who sent us the Green video said “I thought it was tongue in cheek, but as I watched I realized that they were serious.” And we sympathize. From the opening statement that it was subsidized by Google the whole thing felt like parody. BTW Google cares so much about climate that when we searched for Arctic Ice a few months back while researching one of our newsletter items, this was the top result: 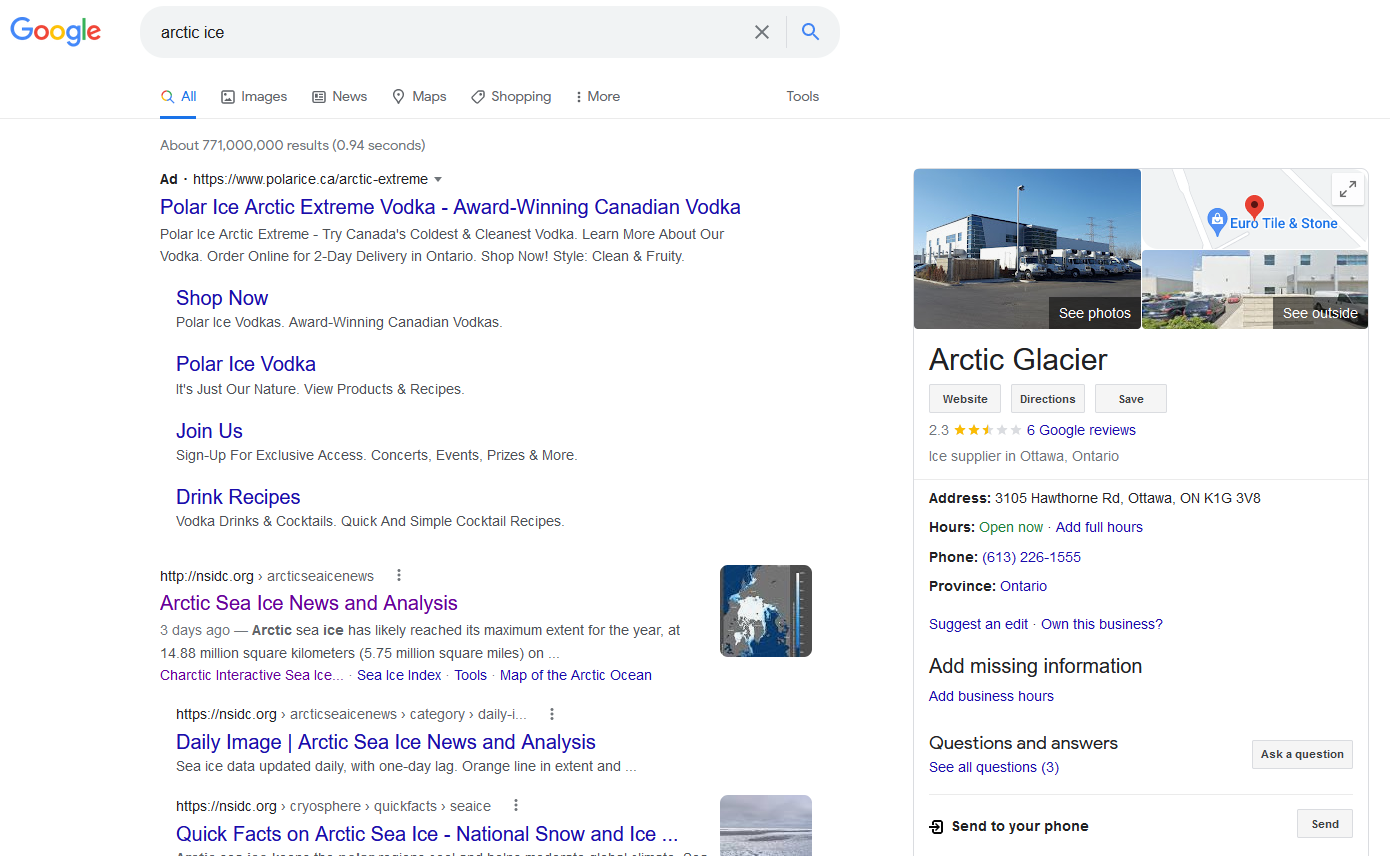 Back on the frontiers of science, experts have discovered that during heat waves your bedroom warms up. Aha! Heat waves! Well sure, but as the opening of the video admits, we’ve all had that experience. In fact in the 1930s in New York City, on hot nights entire families used to go sleep in Central Park, which hadn’t yet had the violence installed that we now take for granted. And as this pathbreaking research apparently proves, if it’s over 30°C out “people slept an average of 14 minutes less than usual.” To which we say you speak for yourself. On nights over 30, we have a lot more trouble than that.

As for temperatures over 25°C meaning “the chances of sleeping fewer than 7 hours increased by 3.5 percentage points” we say at any temperature the chance of that number being statistically significant is not good. But the general point is well established because people have known it’s harder to sleep properly on hot nights since the invention of lying down. Why? Because there have always been hot nights even in places like Canada, never mind Green’s native Alabama.

So we are all going to die and have sunken eye-sockets when it happens because “Depending on how much greenhouse gases build up, by the year 2099 we may be losing 50 to 58 hours of sleep and having on average 13 to 15 nights of short sleep per year just thanks to temperature.” And the problem is already worse in “low-income countries” which are generally closer to the equator where it’s hot because it always was.

These kinds of studies have many glaring problems, the biggest one being that we already know how to cool down hot rooms on sweltering nights. It’s called air conditioning. And even though there are many places today that don’t have it, at the rate incomes are rising, by 2099 it is safe to assume that everyone in the world who wants AC will have it, and a better home with vastly improved insulation. Unless, of course, foolish politicians on misguided climate crusades make energy so expensive that no one can afford to turn the AC unit on.

The study is trending, apparently. But we’re twitchy for another reason than sweltering May nights we’re not even having. It’s that ominous phrase “Depending on how much greenhouse gases build up”. Why ominous? Because such hints always make us suspect the alarmists’ favourite exploded worst-case RCP8.5 scenario is lurking outside our steamed-up window. And bingo! Under “Annual individual sleep loss and short sleep projections” it’s the basis for their not even scary prediction.