Out of the mouths of Ubers

In an energy industry publication called EnergyNow.ca, writer Geoffrey Cann scoffs that “An Uber driver in Calgary recently confided that he didn’t believe in climate change…. Thankfully, Uber drivers are not responsible for setting climate policy.” Which isn’t actually true since this generic “person in the street”, a.k.a. voter, is meant to be highly engaged on the file and to demand that politicians act. And people like Greta Thunberg seem to believe that you don’t need any credentials to be an expert on climate. So can we not treat this unwashed specimen and his arguments with a little respect and perhaps even engage with them? If, that is, we intend to convince rather than bully him?

It’s far from obvious what Cann actually knows about climate other than that there’s gold in them thar hills. But it’s clear what he thinks he knows. He chuckles that the Uber driver believes

“that humanity has only been relevant on the planet for a tiny fraction of the earth’s long geologic history, and the planet has experienced multiple waves of climate change long before human relevance. Extreme weather events were odd, but nothing to worry about and certainly no reason to change anything.”

“He was unaware that the Great Barrier Reef on Australia’s eastern shore has lost 50% of its coral since 1995 because the temperature in the oceans has risen, subjecting the reef to back-to-back bleaching events, and triggering more intense cyclone damage.”

If we may nitpick, the Great Barrier Reef has lost so much coral that in 2020… it recorded its highest amount of coral since 1985. (h/t Joanne Nova). 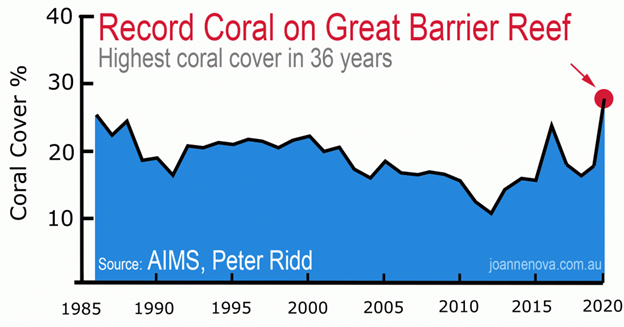 We must object here that “societies” don’t accept things. Individuals think for themselves, not as part of some hive. But Cann piles heat dome on cherry blossom before getting to

“Out of control fires rage in Greece, Australia and California. Floods hammer Germany and Australia. Rain falls on an ice field in Greenland for the first time in recorded history. Polar bears wander further south in search of food because Arctic ice has receded. Climate refugee is now a recognized term as humanity flees to escape.”

To the usual list of argumentation fallacies (ad hominem, appeal to authority etc.) we propose to add “laundry list fallacy”. When you can’t give a single well-supported example rattle off a laundry list of unsubstantiated speculations and throw the burden on your listener to disprove them all. Which we do, week by week, so be sure to use the Search box on our blog site (or that on Anthony Watts’ page) to summon the material quickly to your fingertips as needed. But some claims are too ludicrous to bother with.

Humanity flees to escape? Where to, exactly? Mars? (Just kidding; Mars experienced dramatic climate change long ago, cooling to become extremely inhospitable to life, though recently it has been warming in tandem with the Earth including retreating glaciers for some unknown but totally unrelated reason that has nothing to do with the sun.) In fact the claim of vast hordes of climate refugees is one of the great UN prediction busts of the whole scare. Besides, as with storms, if you consider the pages of history you’ll discover that 2022 did not invent the refugee.

Meanwhile, what about the driver’s point that climate has always changed and bad weather is nothing new? It’s obviously true and deserves a response. Doesn’t it? Apparently not, since in the piece, curiously, Cann mentions it only to ignore it.

Perhaps it’s not that curious. The silence or distortion from climate alarmists when it comes to paleoclimate is actually a consistent feature of their irate presentations, including Al Gore saying temperature had been stable since the end of the last glaciation and John Kerry claiming it had been stable for millions of years, as well as Michael Mann’s “hockey stick” wiping out the Medieval Warm Period and Little Ice Age in favour of a slow steady downward trend with minor fluctuations from roughly the reign of Aethelstan to that of Victoria.

For our part, while acknowledging Cann’s claim that given the current panic there’s money to be made in carbon abatement assisted by consultants like him, we compare his grasp of climate to that of the scorned Uber driver and conclude it was Uber driver 1, Cann 0. And we quote William F. Buckley Jr.’s gibe that “I would rather be governed by the first 2,000 people in the telephone directory than by the Harvard University faculty.” A phone book, for the enlightenment of those lacking knowledge of technological prehistory, was a big collection of land-line telephone numbers useful for propping up objects including small children at the dinner table, back when there were things called “taxis” instead of “Uber” whose drivers were proverbial for holding opinions on everything.

Previous PostWe have ways to make you notice
Next PostYou can't just turn down the sun?

4 comments on “Out of the mouths of Ubers”