We continue our summary of a comprehensive new peer-reviewed survey of extreme weather trends, this week looking at droughts. The imagery of droughts is reliably horrifying, so whenever the media needs a scary visual to accompany a story about climate change they will find a picture of a dried-up lake bed, or a failed wheat crop, or the parched bones of some unfortunate water buffalo. And after a while you could be forgiven for thinking droughts are new occurrences, and that they are getting worse due to global warming, but you would be wrong on both counts. Al Gore has a famous catch phrase about climate change being like a “nature hike through the Book of Revelations” but even passing familiarity with the other 65 books of the Bible will remind you that people have lived with recurring droughts throughout history, including the famous seven lean years foretold by Joseph in Genesis chapter 41 based on his interpretation of Pharaoh’s dream. Had Pharaoh’s dreams looked far enough ahead he would have been pleased to see that global drought trends are downward, despite rumours to the contrary.

Experts distinguish between meteorological droughts, or the absence of rainfall, and hydrological droughts, or the drying up of waterways and lake beds. The two are of course connected, as are other types of drought which are measured and aggregated into categories of severity in this study. Taking all the categories together the data show droughts are less common now than in the past. 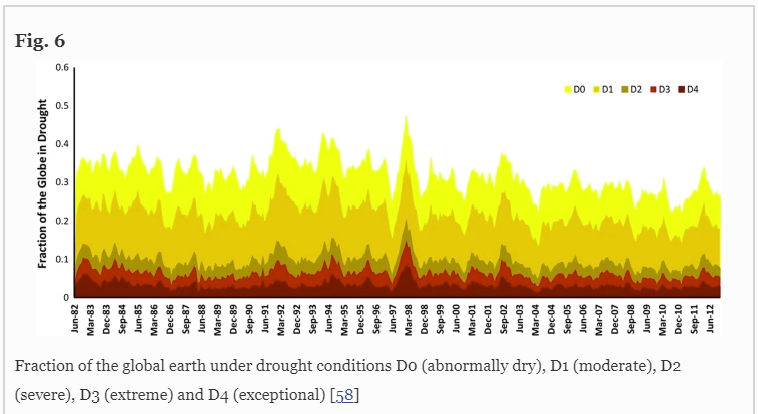 The above Figure shows data up to 2014. More recent analyses in academic journals and in the IPCC reports confirm the trends, leading the authors to conclude “In conclusion, we believe that there is no evidence that the areas affected by the different types of drought are increasing.”

The only thing drying up is the credibility of alarmists who claim otherwise.

One comment on “A new assessment of extreme weather trends: droughts”