The ghouls were even quicker off the mark than usual when devastating floods hit British Columbia. While the rain was still falling on Nov. 16 Catherine McKenna, who used to be Canada’s environment minister, tweeted “How much climate pain can Canadians tolerate… Just look at what BC has been through in one year. Wildfires, heat dome, extreme heat, historic rainfall leading to floods & mudslides”. Climate pain? Yes. The National Post ran an editorial cartoon lampooning climate deniers as old, stupid and hapless. 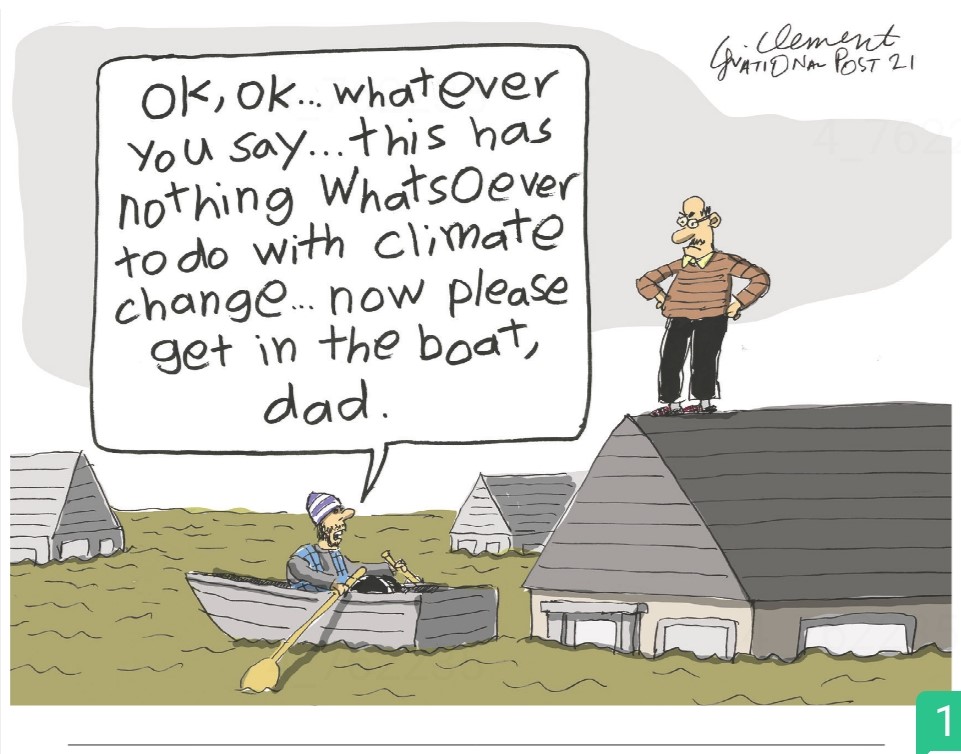 Remember: it’s totally unprecedented. How weird then to see a webpage from the BC government, specifically “Public safety and emergency services”, saying “Be prepared for floods”. Why? Because “Floods are common in B.C. and can happen at any time of year…Floods can damage buildings, cause power outages, disrupt transportation, create landslides and be a hazard for people.” You mean such things have happened before?

In a word, yes. For starters, this flooding is not “historic”. Rather, something very similar happened in 1990. And 1948; someone unearthed a photo of and newspaper article on devastating floods in the same Fraser Valley in that year in which of all things a “sudden hot spell” of the sort we never used to have contributed to a flood that “forced the evacuation of 16,000 people, destroyed or damaged 2,300 homes, left 1,500 people homeless and resulted in $150 million in damage.” So climate may be dangerous. But not because of barely perceptible warming since 1950, or 1920, or 1850 or whenever.

Indeed that article also mentioned a book on both the 1948 flooding and a similar 1894 disaster. And wait. There’s more, in the form of traditional aboriginal knowledge: “Gordon Mohs considers the flood of 1894 one of the ‘smaller floods.’ That’s because the archeological consultant for the Sto:Lo people has heard legends of high water that far surpassed the flood of record. ‘The flood story is part of the origin story for the people of this area,’ he says…. Legend tells of a Musqueam prophet who foretold a large flood” and was laughed at because floods were so common as to be unremarkable. “But when the water rose, the people fled their village and took shelter in a cave on Sumas Mountain, in what is now Abbotsford. The water came up 90 metres. Mohs says the story can be traced back 11,500 years.”

If so, that 90 metre figure may reflect some sort of memory of the “great melt” that initiated the Holocene interglacial. Such numbers are not typical. But that floods are so common that warnings get laughed off might inspire us to reflect that when something happens in 2021 that hasn’t happened since 1948, and before that 1894, it’s not even “once in a century” as the CBC claimed along with BC politicians, but roughly “twice in a century”, and certainly not something absolutely unprecedented and proof that man has set the sky on fire.

To get all technical, as with the heat dome the question for those who care about evidence has to be: Is there a trend toward more flooding? Weather has always been variable and as anyone who understands statistics knows, when something is variable there are outlying events. That you just got 10 heads in a row doesn’t prove that someone has done something to the coin. In fact if you got a steady heads-tails-heads-tails pattern over a long period you’d rightly suspect tampering. Alas, few journalists understand statistics or seem to want to try.

Thus the same phenomenon was also on display in northwest Washington State, where the town of Sumas was deluged at the same time as British Columbia. NBC interviewed an “agricultural meteorologist” at Washington State University who said “We were super hot and dry in the summer, and the switch flips. It definitely matches what the climate models show for the future around here…” But then he added “We’re starting to see what is becoming the new reality…” So we’ve seen the future and it is the present. As in the New York Times headline “Vancouver Is Marooned by Flooding and Besieged Again by Climate Change”.

Cliff Mass, who we quoted last week on the “heat dome” and who does believe in man-made global warming, again insists that such claims are nonsense.

“Within hours of this heavy rainfall event, politicians and the media were suggesting that this event was somehow unique and the result of global warming. For example, Governor Inslee called the flooding an example of ‘a permanent state of attack by the forces of climate change.’ The New York Times claimed that flooding in Northwest Washington was caused by climate change. Similar claims were found in the Washington Post and the Guardian. And, of course, the Seattle Times had several stories, supported by a slew of ‘experts’ (such as a Simon Fraser Professor) stating that climate change contributed to the flooding. The truth is very different than these claims. The Sumas area is extraordinarily prone to flooding and has experienced flooding many times before. And as I will demonstrate below, there is no evidence whatsoever that global warming caused the heavy rainfall associated with this event.”

Mass points out, for a Canadian angle beyond that professor, that Sumas is on the flood plain of the Fraser River, and is subject to additional flood threat from the Nooksack and other local rivers. And he points out there were major floods in 1990 and 1951, to name a few. “You build a town in a historical river delta in one of the wettest portions of North American, you can expect trouble.” It is not correct to claim that flooding in Sumas or the region is something new or unprecedented. “Those making such claims should have spent a little time examining historical floods of the region.” And to help them out, he prints a chart of precipitation in Bellingham, WA since 1950 that shows that some months have a lot more rain than others.

For evidence that such ignorant exaggeration is a rising global phenomenon, Vijay Jayaraj complains that over in India his home state capital of Chennai, once called Madras, frequently floods for long-standing reasons and one new man-made one that isn’t climate change. “The city is prone to yearly deluges from the strong Northeast Monsoon system during the months of October – January. This, coupled with poor planning and destruction of natural waterways, has led to an urban nightmare of flooding as a common event.” However, he adds, “Sky News’ international Twitter report did not let the facts get in the way of its climate narrative. Standing in knee-high water, the reporter said, ‘We know that as a result of our warming planet, we are going to see more radical and frequent shifts in extreme weather – extreme heat to extreme rain.’”

What facts might this reporter have unearthed instead? That there’s been no real trend in rainfall since 1969. One year, 2015 was quite wet while another, 2020, was off-the-charts dry. And the city has, and always has had, quite variable monthly rainfall totals. In short, weather. One might even say “extreme” weather, a reaction anyone is liable to have to their first monsoon. But not anything that is new or different. Jayaraj also presents charts of Cyclonic and Severe Cyclonic Storms in Chennai since 1900 that show, well, variability. However, he adds, there is a big problem: bad urban planning. “The main reason for the flooding is the unplanned expansion of the city, which resulted in the encroachment of natural reservoirs and the blocking of key natural drains for rainwater.”

Incidentally Wikipedia blurts out that “In 2015 Chennai was named the ‘hottest’ city (city worth visiting and worth living in for long term) by the BBC, citing the mixture of both modern and traditional values.” So maybe not even the Beeb really believes either that warmth is bad or that hot places are becoming unlivable, since Madras, the capital of Tamil Nadu, is just 13 degrees north of the equator, on the Bay of Bengal.

For one welcome exception to this willful scientific and even chronological illiteracy, consider a Nov. 20 National Post story on the causes of the flooding that explained that

“The rain that swamped B.C. earlier this week was the result of an atmospheric river, or what’s known as ‘rivers in the sky.’ They are relatively common, with about 11 present on Earth at any time, according to NASA. They are columns in the atmosphere that carry water vapour over oceans from the tropics to more temperate regions in amounts more than double the flow of the Amazon River. But warming air and seas around the globe causes conditions that scientists predict will make them hold more moisture, causing extreme precipitation when they make landfall, often on the west coasts of North America, South America and Western Europe. Atmospheric rivers will become about 10 per cent less frequent by the end of this century, but about 25 per cent longer and wider, a study found. That will lead to nearly double the frequency of the most intense atmospheric river storms.”

Got that? It accurately represents the orthodox scientific alarmist view, including that of the UN’s IPCC, that if the planet warms considerably more the weather may get more extreme. Not that it already has done due to the minimal warming since the pre-industrial era. Whereas the political and journalistic alarmists are scrambling past, present and future, fact, fiction and speculation, and cause, effect and panic into a terrible mess.

Thus the British tabloid Metro, whose motto “NEWS... BUT NOT AS YOU KNOW IT” is unwittingly accurate, tweeted “Scorpions sting hundreds after climate change forces them out of hiding”. And went on to speak of “Unprecedented flooding in southern Egypt”. But unprecedented has a very specific meaning: that there is no precedent.

In fact Aswan, in southern Egypt, is normally so dry you’d think you were next to Sudan. But if they had Google on their computers Metro staff could have discovered that an important reason for construction of the famous Aswan Dam was to control… what’s this? Flooding? Yes. One reason for the dam was that “this natural flooding varied, since high-water years could destroy the whole crop, while low-water years could create widespread drought and consequently famine. Both these events had continued to occur periodically.” And still do, it seems. Must be global heating.