The Victoria Times-Colonist, a name we suspect is not long for this world, recently profiled a doctor who back in June diagnosed a patient as suffering from “climate change”. See, the doctor said, “She has diabetes. She has some heart failure. … She lives in a trailer, no air conditioning,” and her condition was deteriorating and she was struggling to stay hydrated because of climate change. We sympathize. Climate change is causing us to experience a ringing in our ears and persistent emissions of sarcasm.

Anthony Watts was so incensed by this story that he wrote a response that zeroes in on this key point. The BC “heat dome”, he rightly notes, was weather. Yes, it was extreme weather. But it was the result of the confluence of some very unusual factors. So to those who actually favour the practice of thinking things through, the question must arise: Are those various contributing factors becoming more common or more intense, so that these “unusual” heat domes become more common over time? Or to be more exact, that they are becoming more common because of the dreaded climate change.

Here the answer is clear. No. No they are not. He points to a study by Cliff Mass, back in July (and yes, he is a climate scientist, specifically a PhD and professor of Atmospheric Sciences).

As for those sputtering but but there was record heat, bear in mind that if you lived on a planet that was not warming at all, or was warming but not because of anything people were doing, there would still be record heat somewhere at some time. That it happened to be last year is not evidence of anything; if you were to toss coins obsessively you would get the longest run of heads in the whole sequence at some point and when you did, it would just have happened.

You can read Mass’s entire post, which is quite long, and discover among other things that the heat dome happened in June whereas the West Coast of North America where it was concentrated is typically hottest in July. And that Mass is not a “denier.” In fact he says “The Pacific Northwest is warming and human emission of greenhouse gases is probably the origin of much of it…. Let us assume that ALL of this warming is caused by mankind’s greenhouse gas emissions, although some might argue with that assumption. The warming during the past several decades is consistent with human causation, and climate modeling supports this contention.”

OK? Still with us? Good. Because then he asks “if greenhouse gas warming over Washington State is 1-2F,  how can greenhouse gases cause a huge heatwave that is ten to twenty times greater?... Such a ten-times amplification of the global warming signal would require powerful positive feedbacks, which I will demonstrate below are simply not evident. A global warming origin of increased temperature extremes would also be evident in long-term trends of extreme temperatures, but such trends do not exist.”

Such trends do not exist. It is not happening more, so any explanation of why it is happening more fails the most elementary test. As for the heat dome, Mass wrote, “The meteorological dice had to come up all sixes. And they did.” And the point of the metaphor is precisely that if you throw dice often enough, you will get some “unusual” results that are in fact statistically probable, nay over time inevitable. It is not even clear that the planet is currently warming at all.

Such considerations are not exactly front-page news, mind you. Whereas blaming anything and everything on climate change from boring autumn leaves to Amazonian birds with smaller bodies and longer wings, of all catastrophic developments, will make you popular. (Unlike, say, dwelling on rare November blizzards.) Merritt promptly started a lobby group and “The response was immediate. Roughly 40 doctors and nurses at the small hospital — all busy trying to manage a pandemic and their regular professional lives — came together under the banner Doctors and Nurses for Planetary Health.” But there is always that nagging question: Does the science support it? (And in this case: Does this group exist except on a web page?)

Before you say yes but drought made the heat dome more likely, Mass also shows that there is no trend toward increased drought in the region. And here’s his punchline, or one of them, complete with chart: “there IS NO INCREASING TREND for more record high temperatures over our region during the past century. In fact, the past decade (2011-2020) had no all-time records. I suspect many of you are surprised at this, but it is true.”

There is, on the other hand, a very distinct trend toward increasing climate hysteria and trendiness.

Against all this reasoning, it is important to note that if such heat domes start to happen every year, or every few years, it will indicate that something sinister is happening. But just as having more forest fires than usual in the Amazon one year doesn’t make a trend, setting a record in 2021 doesn’t any more than setting it in 1937 does. Thus Mass adds, “a world map of the temperature anomalies (difference from normal) just above the surface (about 800 m in elevation) on Tuesday, June 29th. You can see our extreme heatwave (red colors), centered over the northwest corner of Washington. But there are other large temperature anomalies scattered around the world, both warm and cold. Those are overwhelmingly NOT the result of global warming, but of natural variability. I could show you a similar map for a date, in say, 1940. It would look the same (I checked). Extreme temperatures happen all the time in a somewhat random fashion. They just don’t happen where YOU are located very frequently, because so many random mechanisms must come together at the same time to do so.”

At a time when there is some question how carefully doctors are distinguishing those who die from COVID from those who die with it, it might not be the best time to start injecting politics into patient charts. Or mixing things together. The Times-Colonist cheerleading story went on “Just as doctors and nurses started to make sense of the record heat, it cleared — only to be replaced by a blanket of wildfire smoke.” Which of course is the result of climate change because everything bad is. Apparently “Between 2013 and 2018, the 10 census divisions in the country with the greatest exposure to fine particulate matter (PM2.5) were all in B.C.’s Interior, according to a 2021 Health Canada analysis of the impacts of air pollution on human health.” 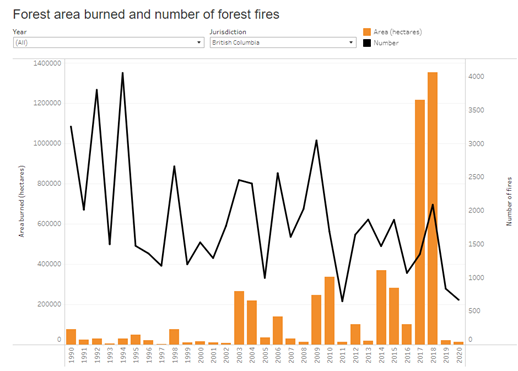 Dr. Activism said “A lot of people in the Kootenays sort of thought that this would be a good place to hide out while the rest of the world falls apart. But it’s, of course, hitting us here, just like it’s hitting many places, and we’re really seeing the impacts.”

So what are those other places? We know that there are fires in one place in one year and in another in the next. But such conditions have always existed so unless you can point to a trend you’re just spreading confusion. Like the Washington Post, oblivious to the “World ends, women and minorities hardest hit” irony, which announces that climate change is so precisely targeted that “Women and children bear a disproportionate impact of climate change.” (Tom Nelson, who we do not normally quote or retweet because of his propensity for ill-temper, bad language and conspiratorial views of alarmism, did nail this one: “WaPo science: Imaginary CO2-induced bad weather is even worse if you don’t have testicles, or something.”)

Attribution science also staggered into Dr. Merritt’s consulting room, charred and disoriented: “Like death by heat, doctors have traditionally struggled to clinically attribute mortality and severe illness to air pollution. For Merritt, this summer’s wildfire season changed all that. When a patient came in struggling to breathe, Merritt knew the smoke — that hadn’t lifted from the region for days on end — had made a case of asthma worse. For the first time in his 10 years as a physician, the ER doctor picked up his patient’s chart and penned in the words ‘climate change.’” Strange, since the particulate business has been going on since at least 2013. And if there’s evidence that it’s getting worse nobody shared it.

Still, the possibilities here are endless. Should someone drown, well, climate change made the water deeper, wavier, grimmer or something. If they starve, climate change is killing the crops. It’s also apparently making kidney stones worse. And poison ivy. And poison oak. And what if, faced with all this fearmongering, people commit suicide?

Oh yeah. “Smoke and heat affect more than peoples’ physical health. Merritt says he saw a number of patients already suffering from depression or anxiety have their symptoms worsen during the wildfire season. Wildfire smoke even triggered flashbacks in a patient who was coping with post-traumatic stress disorder from his time as a soldier.” Soon it will be extremely uncool to die of anything else.

Unless of course you live in some poor country where they really are struggling to feed themselves, heat or cool their homes, cook food with something less particulate-intensive than dung, and benevolent rich white people deny them affordable energy. Those deaths will not be attributed to climate change.

As Watts notes, “Dr. Merritt should stick to treating patients, and leave meteorology and climatology to experts trained in those sciences. After all, you certainly don’t see meteorologists and climatologists posing as medical professionals.”

Well no. That would be malpractice.

Previous PostSo about those penguins
Next Post1920 or 2020? Northam Australia Edition