Viewers of our video on the IPCC “Hide the Decline” debacle will know that in 2001 the IPCC dealt with a problem of downward-sloping tree ring data in recent years contradicting climate theory by failing to match rising temperature readings, thus undermining the practise of using tree rings as a reliable climate proxy for previous periods where we don’t have temperature data, by simply deleting the offending portion then smoothing the graph to conceal the change. You’d think that with the criticism they received they’d have resolved not to do such things in the future. But nay, the practise is back, if anything on a larger scale than before. At the Climate Audit website, Stephen McIntyre digs into the new 2021 IPCC hockey stick and finds, as with the Mann hockey stick before it, there is a weird disconnect between the underlying temperature proxy data and the final graph. Very few proxy series go up in the 20th century, and some clearly go down. Yet the graph in the IPCC report shoots through the roof in recent years with no hint of uncertainty. Like last time, the trick is to hide the decline.

Or rather, the two tricks. The first is called “pre-screening”. It involves taking a large group of temperature proxies (tree ring records, lakebed sediment layers and so forth) and then weighting them based on how well they correlate to the temperature series they’re supposed to match. So the series that don’t match temperatures at all get a weight of zero and disappear. Which is… um… cheating.

The whole point of using proxies is that they’re supposed to tell you what temperatures were in the past when there were no thermometers. If your theory is that tree ring series, sediments or something else can give you that information, but most of them don’t match modern thermometer records in the period when they do overlap, you don’t get to just keep the ones that do and ignore the rest. It’s like a medical researcher only reporting the patients who got better and claiming to have found a cure.

The second trick is to imagine that trees do act like thermometers but some trees experience a weird disease called “divergence” which suddenly causes them to act differently in response to temperatures in recent decades. Even though no one knows what causes it or why, the scientists assume that the tree ring data is perfectly fine in earlier years but if the recent years are affected by “divergence” those parts should be deleted. Which makes selecting only entire proxies that fit look almost honest by comparison.

Sensing perhaps that his readers might not believe such a thing could be taking place, McIntyre links to a Canadian study where the authors proudly explain their reasoning. 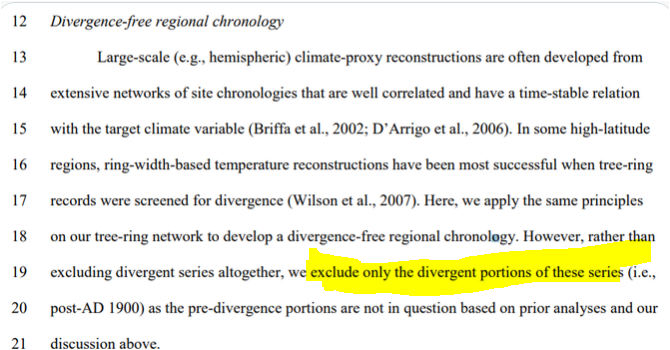 The treatment is quite effective: in the raw data at the top of the graph below, no hockey stick appears. But after removing the divergent bits in the lower part, voila:

Once you get the hang of the tricks, you too can be a climate scientist and publish hockey sticks to your heart’s content. But honest people will avoid you.