The response of 24 soybean cultivars to elevated CO2

From CO2Science: According to Li et al. (2019), northeast China is “the main soybean producing area, accounting for more than half [the] soybean production in China, with approximately 600 soybean cultivars released by the end of the last century.” Yet despite the large number of soybean cultivars farmed here, they acknowledge that there has been a lack of resources devoted to investigating the yield responses of these cultivars to elevated concentrations of atmospheric CO2. Such knowledge and understanding, however, is of great importance, for they contend it will “fundamentally benefit future breeding strategies to enhance soybean adaptability to the elevated CO2 environment [of the future].” And so it was that this team of eight scientists set out to examine the yield response of 24 soybean cultivars to elevated CO2.

The work was conducted in pots in open-top chambers at the Northeast Institute of Geography and Agroecology at the Chinese Academy of Sciences, Harbin, China. Elevated CO2 (580 ppm, or 190 ppm above ambient CO2 levels) was applied for 24 hours per day for the entire growing season and all plants were maintained under well-watered and fertilized conditions.

The results of the analysis revealed that elevated CO2 stimulated a number of photosynthetic traits, including net photosynthesis and leaf chlorophyll concentration, which the authors say led to “greater biomass accumulation during the reproductive stages. And in this latter regard, Li et al. report that elevated CO2 increased above-ground dry weight, the number of seeds and the number of pods by an average of 23.7%, 62.7% and 37.6% across the 24 cultivars, respectively. Soybean seed yield was also enhanced under elevated CO2 by an average 33.1% (range of 3% to 95% depending on the cultivar) as illustrated in Figure 1.

Such findings bode well for future food security when considering that they represent only 24 out of more than 600 cultivars that have been grown in this area. If scientists learned which cultivars provided the greatest yields per unit of CO2 rise, and then if farmers grew them, the world could likely meet the growing food needs of the planet’s ever growing population. 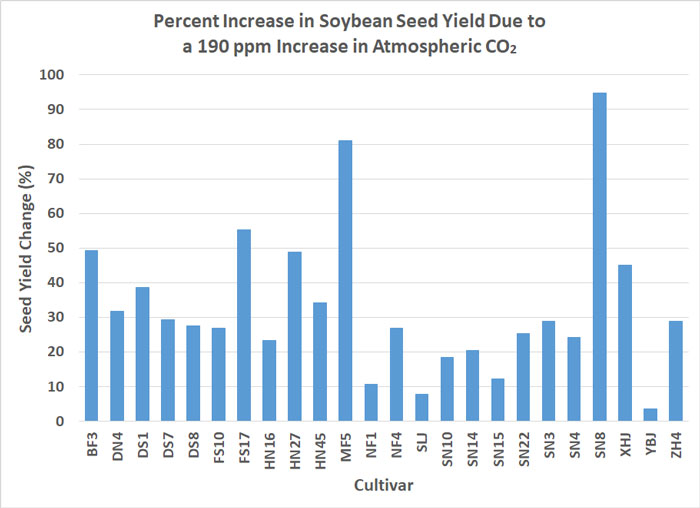 Previous PostThe impact of CO2 on the growth and yield of two soybean cultivars
Next PostGreat Barrier Reef, RIP