From CO2Science: Climate alarmists have ramped up their efforts calling for the total elimination of all fossil-derived energy, claiming there is no downside to such action. But there is. This fact is made painfully obvious in a recent study by Faltein et al. (2020), who examined the impact of low levels of CO2 (relative to present, ambient CO2 air) on African wood-sorrel (Oxakis pes-caprae). O. pes-caprae was a key carbohydrate source for humans during the Middle Pleistocene, being regularly harvested by human gatherers for its edible underground storage organs (USOs). Given that atmospheric CO2 is a substrate of photosynthesis and growth, Faltein et al. were curious to learn how much the bulb biomass of African wood-sorrel would have been reduced (relative to the present) in the Middle Pleistocene and how such a reduction would have impacted efforts to harvest sufficient biomass to attain daily calorific requirements.

To accomplish their design, the four South African researchers grew specimens of O. pes-caprae for three months in mini open-top-chambers under average CO2 concentrations of 227, 285, 320 and 390 ppm. All plants received sufficient water and nutrients. Not surprisingly, Faltein et al. report that at the end of the experiment plants grown under reduced concentrations of CO2 exhibited “significantly decreased plant biomass and bulb yield” (see Figure 1). For example, the scientists say that under the lowest CO2 levels, “bulb biomass decreased by up to 80% compared to current ambient concentrations, while total plant biomass showed a two-fold decrease.” Naturally, such growth reductions were attributed to “the fundamental effects of low [CO2] on C3 photosynthetic physiology.”

With respect to the human impact of such growth reductions caused by low CO2, Faltein et al. note that lower CO2 concentrations “affect both the value of USOs as sources of carbohydrates and the effort that would have been required to harvest sufficient biomass to attain daily calorific requirements.” And in regard to the latter, they calculate “the time required to harvest 2000 calories was more than doubled when [CO2] was decreased from 400 to 180 ppm.”

In considering the above findings, it is clear that humans benefit from higher levels of atmospheric CO2, which increase plant yields and enhance available carbohydrate supply. Reducing the current CO2 concentration of the atmosphere, which has become a platform of far too many politicians and activists, would have devastating impacts on these two parameters, leading to massive reductions in global food supply, which would likely result in civil unrest and conflict. 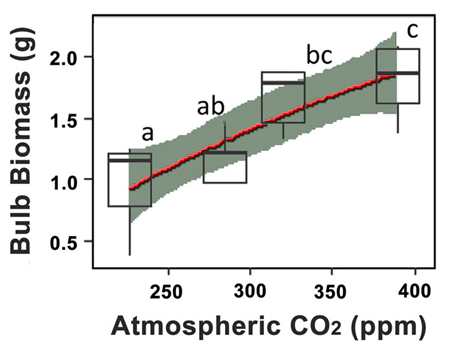 Previous PostUnsettling the apple cart I: Koonin on Climate
Next PostA six-decade analysis of growing season temperature change in Illinois

5 comments on “A serious downside to reducing CO2 emissions”