From CO2Science: Significant urban heat islands have been observed in many cities. To date, much research has revealed urban heat islands are capable of introducing large and spurious warming trends in near-surface air temperature records, which makes it a challenge in determining the true effect of rising atmospheric CO2 on global temperature change. Less studied, however, is the extent to which urbanization impacts land-surface temperature. Yet, ascertaining the influence of urbanization on land-surface temperature is also necessary in order to develop accurate projections of future climate change. This is because land-surface processes impact weather and climate via surface reflectance, soil moisture, soil heat storage and other processes that act to determine the extent of frozen soil and the near-surface heat balance of the atmosphere. Within that context, Bian et al. (2017) studied the effect of urbanization on land-surface temperature in Shijiazhuang, north China. More specifically, they compared and analyzed trends in land-surface temperature (LST) from urbanized Shijiazhuang against two less-urbanized nearby locations (Gaocheng and Yuanshi meteorological stations) over the period 1965-2012.

Results of the study revealed linear trends in mean LSTs at the urban and rural sites were, respectively, +0.13 °C and -0.14 °C per decade (see Figure 1), resulting in an urban-rural linear trend difference in LST of 0.27 °C per decade. Additional analyses of maximum, minimum and mean LST data by month, season and year indicated the urbanization effect “mainly affects the maximum [land-surface] temperature, in contrast to the larger effect of urbanization on time series of the minimum surface-air temperature at the same urban station” (emphasis added). Further, Bian et al. also report the urbanization contribution to the annual mean urban-rural LST difference (i.e., the 0.27 °C per decade trend) is near 100%, indicating “that the increase in annual mean LST at the Shijiazhuang station is probably due entirely to urbanization.”

The authors conclude their work by stating the significant urbanization effects in the LST time series “indicate a large relative surface warming in urban areas compared with rural areas,” presenting a “problem of data representativeness” in urban stations for “monitoring and studying large-scale climate change.” And until such problems are effectively addressed and accounted for, the true impact of rising atmospheric CO2 on global climate may well be vastly overstated given that up to 100% of mean annual LST in this study was determined in this study to be the result of urbanization, leaving no room for rising CO2. 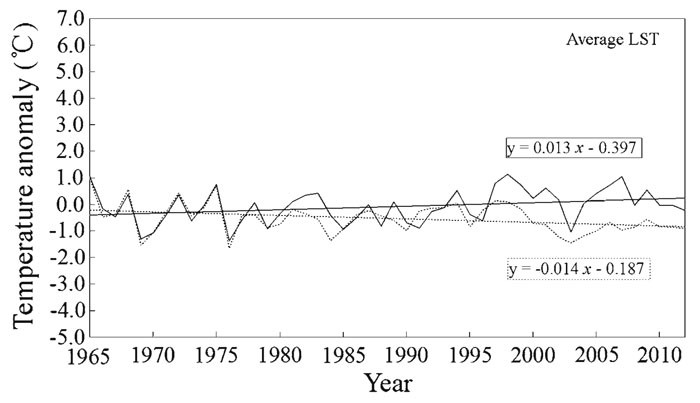