From CO2Science: Writing as background for their study, Foo et al. (2020) state that most so-called ocean acidification studies on marine calcifiers “have been conducted in a laboratory setting, typically involving stable pH conditions,” which studies tend to show an “overall negative effect of acidification with impaired development and calcification.” However, they say it remains to be seen whether or not these presumptive negative findings would occur if such experiments were conducted in a more natural environment, because laboratory studies fail to incorporate “the [full] range of environmental factors present in nature and their inherent variability.” Indeed, it seems only obvious that the best and most realistic experimental conditions are required in order to produce a realistic assessment of the future potential impacts of ocean acidification on marine life. And so it was that this team of six scientists set out to conduct just a study, focusing on the early larval growth of Arbacia lixula, a “particularly important keystone ecosystem engineer in the Mediterranean.”

To accomplish their objective, Foo et al. conducted simultaneous experiments on three populations of sea urchin embryos in both a laboratory and natural field setting. The field site was near an underwater CO2 vent located off the northeastern coast of Ischia, Italy. A low pH location was selected in an area proximal to the vent that maintained an average pH value of 7.8 and a control location was selected approximately 150 m away where seawater pH averaged 7.95. In the laboratory, natural seawater was supplied to a series of outdoor experimental tanks that were kept at control (8.01) or low (7.80) pH. Immediately following fertilization embryos from the three populations were placed in the two pH treatments in the laboratory and in the field within a span of 1 hour. Twenty-four hours later the specimens were collected and their growth responses analyzed. It was the authors’ hypothesis that larvae “would show reduced calcification under acidification in the laboratory and at the vent site compared with ambient conditions.”

In reporting their findings Foo et al. state that, “surprisingly, acidification had opposite effects on larval growth in the laboratory and in the field.” Indeed, as illustrated in Figure 1, mean arm length was highest in the field’s low pH site (155 µm), followed by the field control site (144 µm), the laboratory control treatment (141 µm), and the laboratory low pH treatment (131 µm). Arm asymmetry, the other growth parameter examined, was unaffected by pH.

With respect to why larvae at the low pH vent site displayed the greatest growth, the researchers deduced it was likely due to differences in food availability, where CO2 enrichment at the vent site enhanced primary production, thereby providing a greater phytoplanktonic food source for the growing larvae.

Commenting on these observations, the authors say “for A. licula it appears that the planktonic phase of this species may be able to persist in a low pH environment through compensatory feeding, availing themselves of the higher productivity stimulated by high CO2,” adding “the plasticity displayed by A. lixula larvae may be crucial in buffering the population as a whole against the harmful effects of global change, buying time for genetic adaptation to occur.”

Of course the above is good news for this particular echinoderm, but the results of this study have greater implications for ocean acidification studies in general. Consider, for example, if this study had only been conducted in the laboratory (as nearly all ocean acidification studies are). If that was the case, then the results would have been such that the authors would have concluded rising CO2 (i.e., ocean acidification) is detrimental to A. lixula larval growth. Yet, by incorporating field treatments into their study, the future outlook flipped from a completely negative assessment to one that is entirely positive. Oh what a difference a properly designed and implemented experiment can produce! This fact is not lost on Foo et al., who write in the concluding paragraph of their paper “after over a decade of ocean acidification studies on sea urchin larvae, with a variety of suggested response mechanisms, our results highlight the need for controlled experiments with respect to food availability and application of naturally variable pH,” while adding “caution must be applied when drawing inferences from laboratory studies as our results show contrasting responses between laboratory and field settings for the effects of ocean acidification on sea urchin calcification within the same population of larvae.” 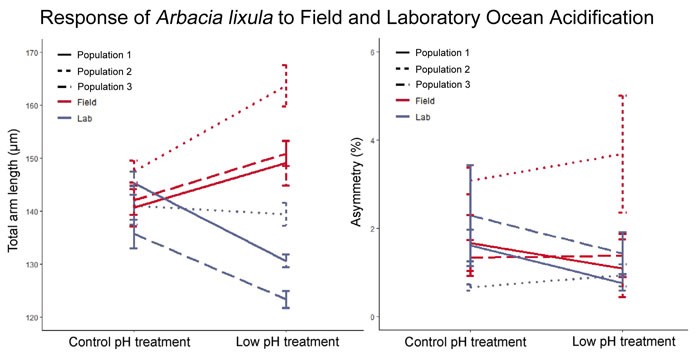 One comment on “Field studies matter in ocean acidification experiments”