The combined impacts of ocean acidification and warming on Symbiochlorum hainanensis

From CO2Science: The experts at CO2 Science have long challenged claims of widespread coral reef demise due to future projections of ocean acidification and warming. Support of their position is grounded in an ever-growing body of scientific research that they have reviewed and commented on over the past two and a half decades (see, for example, the many links on their website under the heading Coral Reefs). The latest review comes from the work of Gong et al. (2020). Working with a unicellular alga commonly associated with tropical reef corals in the South China Sea, Symbiochlorum hainanensis, the four Chinese researchers examined its individual and combined response to ocean acidification and warming. The full-factorial design included a control (26°C, pH = 8.16) and three other treatments: (1) warming only (32°C pH = 8.16), (2) acidification only (26°C, pH = 7.81) and (3) combined ocean warming and acidification (32°C, pH = 7.81). S. hainanensis cultures utilized in the experiment were isolated from Porites lutea corals in the South China Sea and the culture treatment conditions lasted for 28 days. So what did the study reveal?

In the authors’ own words they say “we found that this thermos-tolerant alga exhibited a positive growth response to individual acidification, elevated temperature, and the combined [temperature and acidification] treatment.” Such positive responses in all three treatments were evident in algal growth rate, dry weight, chlorophyll fluorescence and pigment content. In particular, as shown in the figure below, cellular dry weights of S. hainanensis were enhanced by 89%, 244% and 189% in the warming only, acidification only and combined ocean acidification and warming treatments, respectively, relative to control conditions.

Additionally, transcriptome analysis revealed hundreds of differentially expressed genes in the three treatments (relative to the control treatment), including “genes related to photosynthesis, CO2 biofixation, carbohydrate metabolism, cell cycle and control, nutrient input, transport and metabolism, stress response, and intracellular homeostasis.” The up- or down-regulating of these various genes helped to explain the molecular mechanisms behind the overall beneficial growth and morphological changes observed in this study in response to ocean warming, ocean acidification, and ocean acidification and warming treatment conditions. And, according to Gong et al., these findings ultimately suggest “strong acclimation of this alga to future ocean environmental changes,” which is a nice way of saying this alga and those corals which share a symbiotic relationship with it are in no danger of rapid demise or extinction from rising temperatures and/or increases in the air’s CO2 content. In fact, they will likely benefit from it! 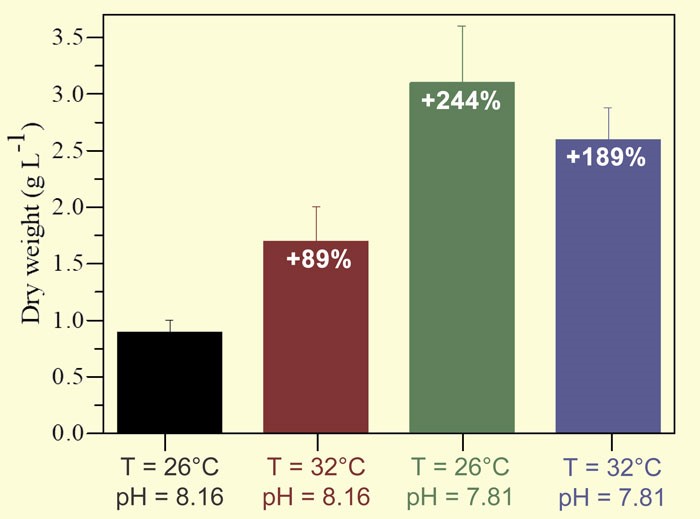