Indications of recent (and future) heat adaptation in Madrid and Seville, Spain

From CO2Science: Climate alarmist predictions of increasing human mortality in response to rising global temperatures generally fail to account for human adaptation, likely leading to erroneous estimations of the future number of heat-related deaths caused by global warming. The reality, however, is that the human body has an inherent ability to adapt to temperature increases well-beyond the rate projected by climate models so that there will likely be no change, or even a decline, in heat-related deaths in the future. The recent work of Follos et al. (2020) illustrates the above thesis.

Focusing on the Spanish cities of Madrid and Seville, the seven European researchers examined the temporal trend in the temperature of minimum mortality (TMM). Gross mortality data for Madrid and Seville were obtained from the National Statistics Institute and maximum daily temperatures for the two cities were retrieved from the State Meteorological Agency over the period 1983-2018. If the TMM threshold was found to increase over time the authors presumed “a higher and higher temperature would be needed to produce fatalities due to high temperature.” Further, if the trend in TMM increase occurred historically at the same (or greater) rate as the predicted future CO2-induced temperature rise, then it could logically be assumed that “complete adaptation” is taking place.

So what did the authors’ work reveal?

As shown in Figure 1, TMM values in Madrid and Seville exhibit considerable interannual variability superimposed on long-term statistically significant increasing linear trends (p < 0.05). For Madrid, the slope of the trend amounts to a TMM increase of 0.0577 °C/year (0.58 °C/decade), whereas for Seville it is a much higher 0.1138 °C/year (1.1 °C/decade).

The significance of the above findings is noted first by the fact that average daily maximum temperatures rose by 1.2°C in Seville and 1.6°C in Madrid over the 36-year period, corresponding to linear rates of increase of 0.033 and 0.044 °C/year, respectively, which rates of increase are smaller than those observed in the TMM at each city. Second, the model-projected future rate of maximum temperature increase of 1.4°C over 50 years, or 0.028 °C/year (RCP 4.5 scenario), is also below the observed current linear increase of TMM in Madrid and Seville, which combination of findings indicates populations in both of these Spanish cities are currently adapting and will likely continue to adapt to temperature-induced heat stress in such a manner that is suggestive of an overall reduction in heat-related deaths. 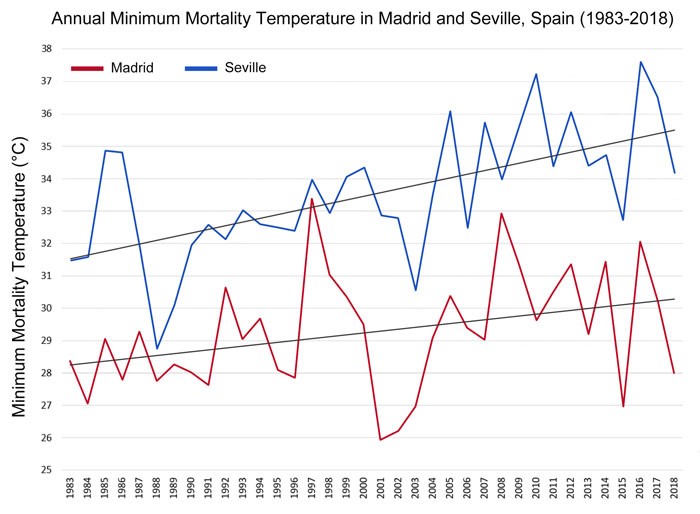 Figure 1. The temporal evolution of the annual minimum mortality temperature in Madrid (red line) and Seville (blue line), Spain, over the period 1983-2018. Black lines in each series represent the linear trend. Adapted from Follos et al. (2020).

One comment on “Indications of recent (and future) heat adaptation in Madrid and Seville, Spain”