A shocking paper about boring temperatures

Ho-hum, some scientists wrote a paper about historical temperatures in Ireland. It being a real science paper, they actually dug into real-world information, rather than just running computer models. They pored through yellowed historical newspapers, handwritten archives, weather publications and other sources from all around the Emerald Isle, compiling over 970,000 local temperature records from 1831 to 1968. Then they merged it with the modern data set and extended it to the present. And, bless my soul, they found lots of ups and downs but no apparent trend in the daytime maximum temperatures in Ireland since 1831. Which in a more rational age would have been considered boring, but to us seems downright startling.

The data are presented in somewhat cramped and noisy graph, but the message is clear enough. 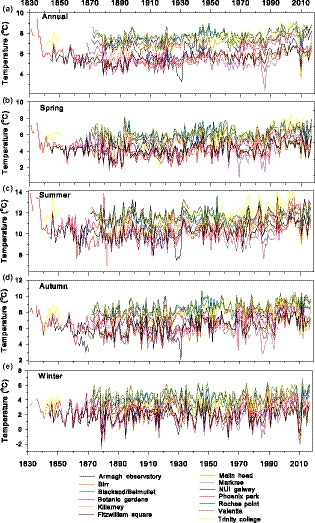 It is definitely the case that up until about 1990 there is no trace of warming. After 1990 the summers seem a bit warmer, winter 2010 appears to be the coldest since 1880, and the other seasons appear comparable to the 1940s.

Even if your eye insists on spotting a temperature trend, it is small compared to the monthly variations. But not every trend has been small. A data set like this extends back to the early 1800s, when Ireland was wracked by misery and destitution even in the years in which the potato crop didn’t fail, a situation that was not ultimately relieved until the modern era. So if you were to ask what has changed over this time in Ireland, the answer would be that life has improved dramatically while the climate changes have, by comparison, hardly been noticeable. And that, according to the experts, is true for the world as a whole and is almost certainly going to be true for the coming century as well. As we have often said, the real threat isn’t climate change, it’s climate change policy.