The Washington Post tells us of Boston that “Famous for its role in America’s war for independence, this city is now fighting the rising seas.” And apparently it is. Only this time the enemy isn’t showing up.

According to the Post, “Mayor Martin J. Walsh (D) has vowed to spend more than $30 million a year, equal to 10 percent of Boston’s five-year capital budget, to defend the city from a watery future that is expected because of climate change.” Which shows, again, that the airy endorsement of alarmism is beginning to have very real consequences. Every dollar spent fighting purple dragons is a dollar not spent fixing roads. And Walsh is fighting purple dragons. “The sea that surrounds Boston crept up nine inches in the 20th century and is advancing ever faster toward the heart of the city. And as climate change accelerates, the pace of sea-level rise in Boston is expected to triple, adding eight inches over 2000 levels by 2030, according to a report commissioned by the city. The ocean might climb as much as three feet above 2013 levels by 2070, the report said.”

Might. Then again, might not. Boston’s sea level record is online at the Permanent Service for Mean Sea Level website. And sure enough, it’s been going up since the record began in 1925. 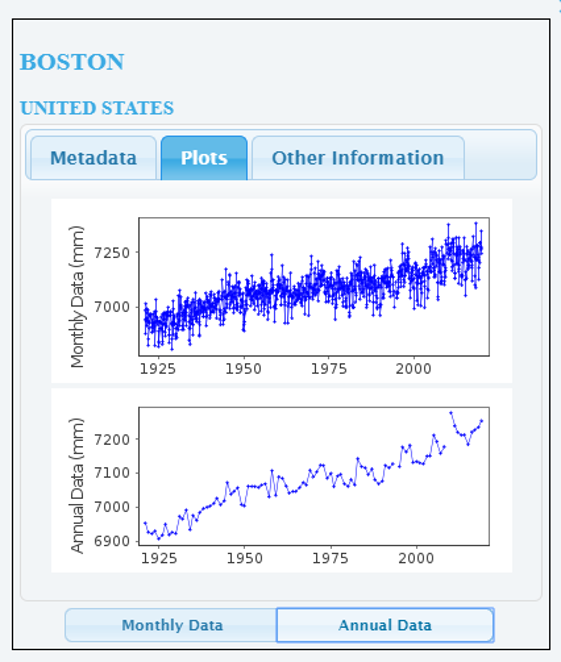 This chart demonstrates that it is not a recent phenomenon, especially since the really rapid increase happened from 1921 to 1950, long before greenhouse warming was an issue. And after hitting a peak in 2010, sea levels have actually been dropping.

Nor is it a local issue. All around the North Atlantic basin the long-term tide records show a similar upwards trend. Until you get far enough north, where the uplifting land due to the slow rebound from the melting of the last ice age offsets the rising sea level.

The rising of the north part of the American and European continents means the southern parts are pivoting down. As we pointed out about a city pretty much on the opposite side of the world from Boston, Jakarta in Indonesia, you can have major flooding problems if your city is sinking. As many places are, making the measurement of sea level rise very difficult. It may be tempting to compare the rising seas to, say, an ice cube melting in a glass. But in fact the Earth’s crust is not a rigid stationary container. It’s a very dynamic and complex object, with some parts eroding, others accumulating, some still rebounding from the last glaciation, others subsiding due to subduction of tectonic plates or rising for the same reason and so on.

Human decisions also play a role. For instance in Boston, the Post notes, “half the city is built on low-lying landfill. Among the vulnerable spots are commercial piers, Logan International Airport, low-income neighborhoods, the South End, the New England Aquarium and pricey apartment buildings in the newly redeveloped Seaport area.” Oh my. Are you saying posh people in a very liberal state have been buying seafront property almost as though they didn’t believe their own pieties about climate change? Who saw that coming?

Oh right. Us. Mind you Boston also built public housing projects on landfill “particularly vulnerable to flooding” so they put poor people in the line of flood too. And since unlike some cities urged to stage a “managed retreat” Boston really has nowhere to go, the mayor wants to raise Main Street in the Charleston neighbourhood by two feet to make a flood barrier, put watertight doors on some rail tunnels, build up waterside parks and so forth.

After scaring readers with projections of sea level rises from one foot to nearly eight feet, and citing a city government illustration of even former Celtics star Kevin Garnett apparently threatened with inundation (see Slide 11), the Post admits “The forecast numbers all have substantial margins of error” before insisting that “even the smallest sea-level rise is threatening.”

No it’s not. It’s the same as the amount that the waters rose in the last century during which Boston may have had many problems but on the whole did extremely well, better than most of the world in fact, and was not turned into a marine tea party. What’s more, since despite the time-travelling predilections of climate alarmist analysis almost nobody says man-made climate change began having massive impacts before 1970, and the NOAA’s thoroughly alarmed site Climate.gov says it only began to accelerate around 2006, though the Post manages to cite one study saying “sea-level rise in Boston began to pick up speed only after 1940” instead. But if the rise in this century is around a foot, and in the last century it was nearly a foot, not much is happening. Nor is it happening fast.

The rate of increase for most of the 20th century was around 1.4 millimetres a year according to that NOAA site, (though how you’d measure something that small with that decimal-place accuracy given all the uncertainties is anyone’s guess), which is 0.06 inches in the United States. They say it’s now 0.14 inches a year or 3.6 mm, and blame the entire increase on humans as if nature was this inert thing that just sat there until we bothered it.

It’s not. There are indications that as sea levels rose and fell due to natural temperature variation over the past 2000 years, including the hated Medieval Warm Period, the oceans have risen during natural warmings at a pace not unlike that we’re seeing today. And by the way, The Atlantic early last year published an “oh never mind” piece about Antarctica melting and the seas surging three feet by 2100. The same researchers who rang that alarm bell are now muffling it, saying well maybe a foot.

There’s that foot again. And it, like the 0.14 inches a year, means just over one inch a decade, a slow, steady, non-scary increase. So the contention that an advanced industrial city can’t cope with that kind of increase, other than by throwing away its advanced industry, defies comprehension.