It's not really winter out your way

Remember how it’s the end of winter as we know it? They’re having trouble doing so in Newfoundland, Ontario and Alberta right now. But of course alarmist predictions have a certain elasticity. If they’re confirmed, or made after the fact, it’s proof positive. If they don’t work out, it was metaphorical or just some politician or it’s about to happen. Including that according to “a team of scientists from across North America” winter in Manitoba is going away. This time for sure.

In December Global News reported a study from the Hubbard Brook Research Foundation that the southern Prairies were getting two weeks less winter than a century ago and averaging five fewer days under -30 C. The period with snow on the ground has also shrunk by 2.5 weeks since 1920 and “The conclusion of the report found winters across northeastern North American forests are losing their cold and snow, with one to three fewer weeks of cold and the white stuff each year compared to a century ago.” And in case the past isn’t scary enough, look at the future: “The Prairie Climate Centre out of the University of Winnipeg has a Climate Atlas that allows people across the country to see how climate change will impact their own backyard. According to the data, Winnipeg will go from about having two weeks of 30 C weather to seven-and-a-half weeks by 2080. The data also shows that we will also go from seeing 12 days of -30 C temperatures to just one by 2080 and 79 days of -15 C winter days to just below 43 by 2080.”

Oddly, we covered Winnipeg last September in our Climate Emergency Tour series and since the late 1930s there has been no discernible average temperature trend. (At time of writing it was -15 in Winnipeg.) As for snow cover, Environment Canada data only go back to 1955, at least on weatherstats.ca, and show no trend unless possibly a slight increase. You can go back farther at YourEnvironment.ca and get records from some early rural weather monitoring sites. Those for Clanwilliam, 230 km west of Winnipeg, go back to 1882. January average highs look like this: 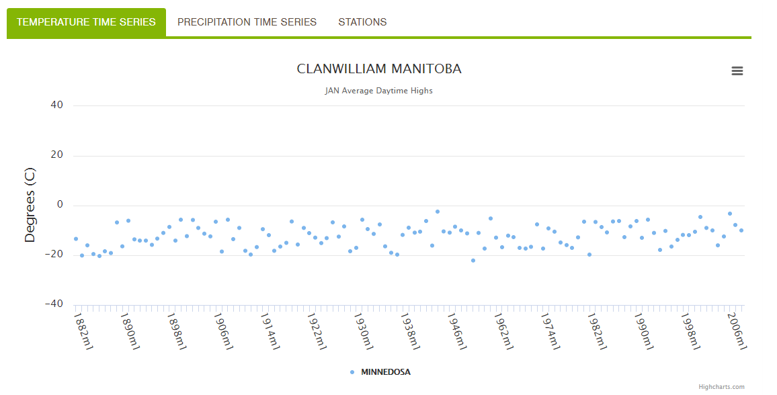 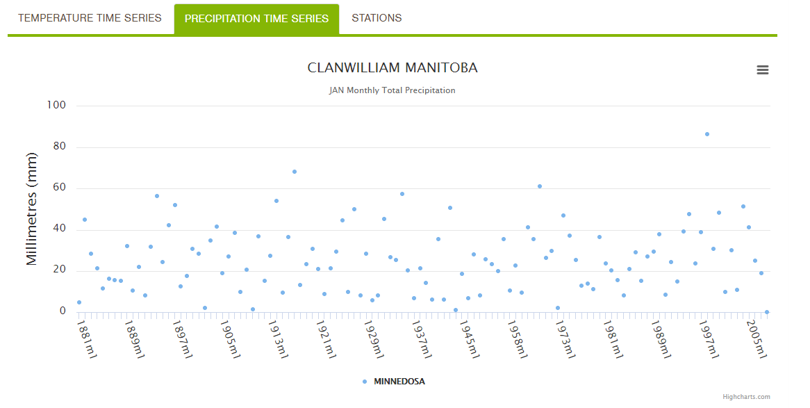 If there's any temperature trend at all, it was before 1900, and on precipitation, before 1940. Which brings up yet again a very basic point that alarmists seem to have enormous trouble keeping in mind: We know there was natural warming from the latter 19th century on as the natural Little Ice Age ended. So it is cheating to use trends from before about 1970 unless they actually accelerate after roughly that date, especially as atmospheric CO2 rose far more sharply after 1970 than before. Warming trends in the 1st half of the 20th century do not confirm the alarmist hypothesis, they refute it.

Of course we can’t say for sure what happened between 2020 and 2080. But neither can they.

Previous PostHot peppers
Next PostHotter than the hottest thing ever

5 comments on “It's not really winter out your way”