No, not a belated Black Friday reference. Black Thursday in 1851, the day half the state of Victoria, Australia, was devastated by bushfires during a blistering heat wave. Tony Heller of realclimatescience.com was annoyed by the umpteenth Australian journalist living in unparalleled 21st century comfort and prosperity bewailing today's trivial temperature fluctuations as some kind of existential crisis. So he dug up a news item about the real climate crisis over 160 years ago, on Thursday February 6, 1851, when temperatures hit 117˚ F in the shade and strong winds swept wildfires across a scorched landscape, consuming men, women, children and the farms on which they depended. If anything half as bad happened today we'd be told in no uncertain terms it was a crisis and it is our fault. Yet Black Thursday was a real crisis and it was nobody's fault. And people wonder why some of us are skeptical.

Heller's video is only five minutes long but it gets right to the heart of modern alarmism. How can there be a climate emergency today if everything keeps getting so much better? Food production is up, malnutrition is down, literacy is up, poverty is down, etc. etc. But no, the alarmists cry, look at all the terrible weather we've been having. Except we always had bad weather and even occasional catastrophes. It’s just that people today have short memories and a heightened sense of drama and perhaps self-importance, and somehow convince themselves it's a totally new thing.

As Heller notes, Black Friday was described a few years later in the Australian media as follows: 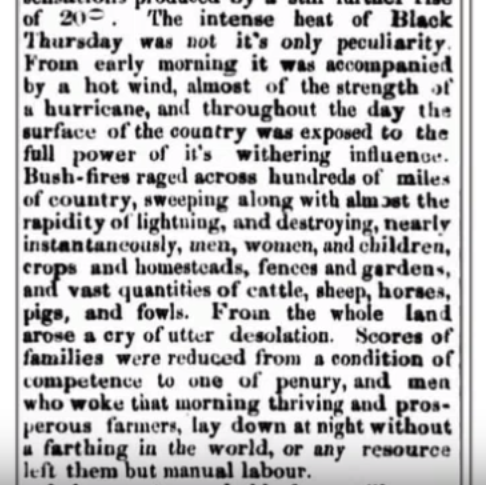 We have nothing in our lifetimes to compare it to. Instead every time there's a stiff wind and a few shingles get blown off the roof, we're told it's climate change and we're facing an existential threat. In reality the only thing that would cause us to cry out in utter desolation would be if the alarmists get their way on global energy policy.

Previous PostThen all the plants died and...
Next PostA prediction that came true