Some pictures of hot models

We're not given to using clickbait to attract subscribers. But here the models in question have temperature curves because they’re computer climate projections. And as advertised they're sure hot. The problem of mathematical predictions overshooting observed warming has bedeviled the climate science community for years. Now that the new super-high tech next generation ultra-deluxe models are coming online you'd think they'd have the problem beat. Alas, no, via the UK cliscep website we learn that the new models run even hotter than before, but seeing their creations rocketing right off the catwalk isn't stopping the designers from claiming success.

The last United Nations Intergovernmental Panel on Climate Change report contained a buried chart that showed the growing divergence of models and observations as of the earlier part of this decade because privately the alarmists know it’s a scientific as well as a public relations problem and they need to address it. But how?

Recently Professor Ross McKitrick of the University of Guelph tweeted out an updated version of the chart: 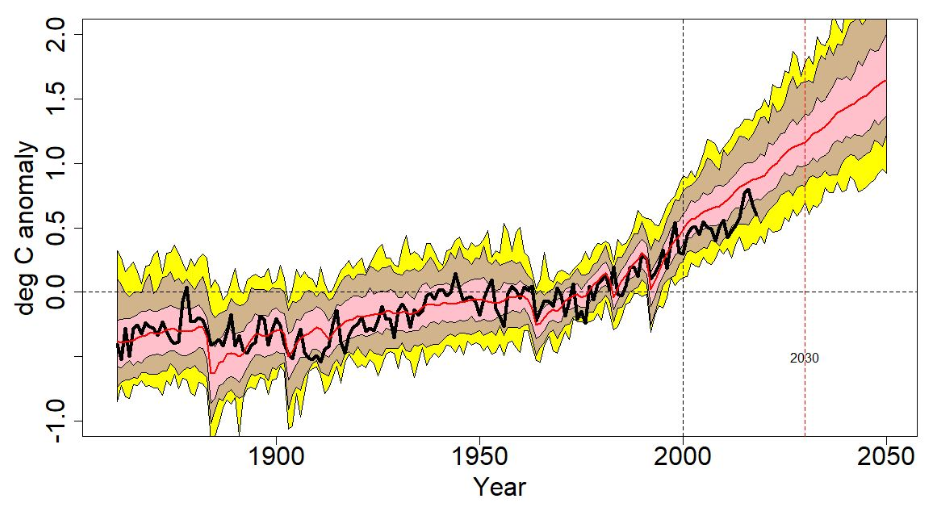 The black line is the observed average temperature record. The inverted-V at the end was from the powerful 2016 El Nino warming event but as it fades out, observed temperatures are reverting back to the flat line base of the post-2000 hiatus. The bottom yellow band in the above diagram shows the lowest 2.5 percent of model predictions (using the so-called RCP4.5 emission scenario, a mid-range estimate). Observed temperatures are thus back down to the bottom tail of the range of model runs.

What's remarkable in these pictures is that, up to about 2000, the red line showing the average model run and the black line showing average temperature criss-crossed each other over and over, almost as if the models were deliberately tweaked to follow known data instead of running amok (which they were). But after 2000 the models are left to their own impulses, and promptly overshoot. The real world isn't warming as much as climate models predict.

That indictment was true of the so-called “5th generation” models that produced the above pictures. And now we are getting a glimpse of the 6th generation models, using more sophisticated algebra on more powerful computers. So the fit should be better without tweaking, right? Wrong. Rather than tone down their tendency to warm too fast the modelers cranked it up, then tried to yank it back down to observed reality by assigning a higher value to the stronger cooling effect of pollution aerosols.

This approach saves the theory by asserting that greenhouse gases have a strong warming effect as advertised. It’s just been masked by a very strong cooling effect from air pollution. So as air pollution goes down, or at least stops rising fast, and GHGs keep being produced, rapid warming is inevitable. As it is in the models.

Unfortunately out here on planet Earth, the actual outcome is that the new models do a terrible job even of reproducing the 20th century let alone predicting the 21st. This particular model, called the UKESM1 (for United Kingdom Earth System Modeling), shows the problem.

In the above chart the tick marks are for 1900, 1950 and 2000, the black line is the observed average and the blue lines are new model runs. The models show way too much cooling from the 1950s through the 1970s, then way, way too much warming through to the present.

Amazingly the authors of the underlying study claim success: "Overall the model performs well, with a stable pre-industrial state, and good agreement with observations in the latter period of its historical simulations." But climate modeler James Annan has a different take: "Could have been better written as: UKESM1 does a great job at everything other than its primary function."

We're not sure it does at great job at everything else either. It can’t even predict the known past, let alone the uncertain future. Are we supposed to praise the colour scheme or something?

Previous PostHeck no, we won't go
Next PostWhale the saves