The World Economic Forum, where rich people act trendy and concerned, has just warned us that climate change will pound Canada, Switzerland, the United States and India especially hard. But if it sounds like vague nonsense, it was actually very precise nonsense: “It doesn’t matter if you’re in a hot or a cold climate, a rich country or a poorer one – unchecked climate change is going to devastate the economy. That’s the finding of a new report from researchers at the National Bureau of Economic Research, which estimates 7% of global GDP is likely to be wiped out by the end of the century unless action is taken to stop our planet overheating.” Actually the 7 percent is not “likely,” it’s a worst-case scenario. But suppose it happens. Seven percent? Did anyone ever jump out a window because their portfolio dropped by 1/14? If so, jump back in, because it’s seven percent off the increase in your estate by 2100, not off your current wealth.

The scary piece by the WEF’s “Senior Writer, Formative Content”, another warning sign, tiresomely proclaims that “the United Nations says that climate impacts are happening faster, and hitting harder, than anticipated.” The science being settled, you understand. But also wrong. And of course “Sea levels are also rising at an alarming rate, with a significant risk of regular flooding in coastal areas” while “The shrinking cryosphere – an area including the world’s glaciers, ice caps, and frozen oceans – is already creating negative impacts across a range of sectors.” Everybody knows such things. We don’t need no stinkin’ evidence. Or offer any.

What we do need, evidently, is calculus. My goodness the actual piece (here, behind a paywall) is full of equations. 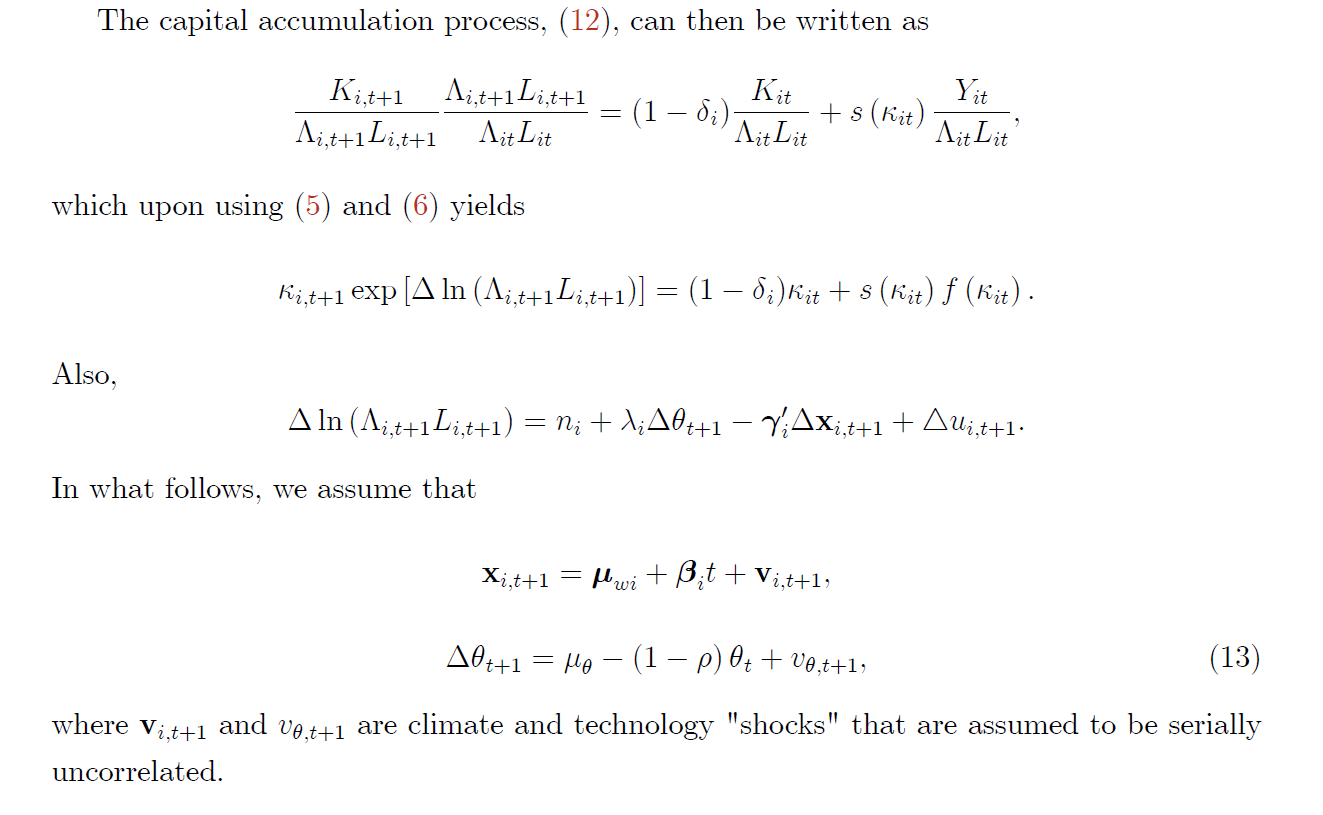 Each of which calculates to three or four decimal places what would happen if a long list of speculative hypotheses about how economies and ecosystems work turn out to be exactly right.

Surprisingly the authors frame their analysis, not in terms of warming, but of temperature and precipitation changes, up or down. Turns out the precipitation changes have no impacts on the economy. Floods, droughts, storms, hurricanes—the data say the global economy just shrugs them off. So much for the climate emergency. And as for temperature, cold is just as bad as warming. The costs of unexpected jumps in temperature are just as costly as unexpected drops.

Regrettably all this abstract cleverness is totally wasted. Totally. Because of a very elementary statistical gaffe, deliberate or not, by those hyping the report. Namely that what’s predicted is that the rate of GDP growth will be slightly lower if the planet warms, not that GDP itself will actually shrink. The paper says “our results show that an increase in temperature above its historical norm is associated with lower economic growth in the long run”. Not no growth, let alone negative.

Thus the hide-under-the-burning-bed fear is that GDP will be 7 percent lower in 2100 than it would have been without any warming. Not 7 percent lower than it is today. An economy that grows at 3 percent per year will be more than 1,000% larger after 80 years than today. Or, worst case, more than 993 percent larger. So close that window.

We aren’t going to be poorer in 80 years, unless we give in to the climate alarmists and abandon fossil fuels. The worst case scenario is that we will be much richer, just not quite as much richer as we might have been. (Well, somebody won’t be. Canadian commentator Terence Corcoran recently pledged to reach personal net zero carbon emissions by 2050 and he will not be alone in that respect.)

The bottom line here is that the only way it makes any sense to enact the sorts of drastic measures needed to stop “devastating” warming is if their compounded cost over 80 years is less than the cost of the warming which, as noted in the fine print, is a mere 7% of what GDP is projected to grow to over the next 80 years. Which won’t be easy. Because by the magic of compound interest, it turns out that whatever steps are taken to forestall warming must, in combination, reduce annual growth by one tenth of one percent or less, or they will cause more harm than what this paper says warming would cause.

Previous PostFollow the mob
Next PostZzzzzzzzz