Because we never used to have heat waves

Climate Home News says “Last July’s deadly heatwave in Japan could not have happened without human influence on the climate” and cites a study it summarizes: “decades of fossil fuel burning killed a thousand Japanese people…. As warming continues, we can expect such studies to leave less and less space to hide for deniers of the human costs of climate change.” No mention that decades of fossil fuel burning powered a postwar economic miracle that saved tens of millions of Japanese from dying of disease and starvation. As for “As warming continues”, what if it doesn’t? What if instead temperature drops and kills crops? Will there be more space for us to hide in?

Climate Home News is not afflicted by doubts. “In the burgeoning field of event attribution, this is one of the clearest results yet. Japan has robust historic weather data, unlike most poorer countries vulnerable to weather disaster. The link between global warming and extreme heat is more direct than, for example, with tornado clusters hitting the US.” Which is an interesting way of blaming recent American tornados on climate while appearing not to. But here’s the thing: In a lot of places including Canada it’s unusually cool not unusually hot. 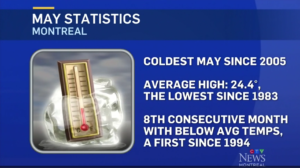 CTV News just reported (see the May 31 News at Six clip, at 22:40) that Montreal has seen its coldest May since 2005 and eight consecutive months with below average temperatures for the first time since 1994. Of course Montreal (like Japan) is just one place. But weather forecasts for Canada this summer do not foresee “extreme heat” or even continued warming.

It’s a mixed bag, climate being complex. But the Weather Network, which generally takes an alarmist line, just said “Summer’s near, and we’ve frost advisories in five provinces” and adds “As the Weather Network releases its 2019 Summer Forecast, it’s not feeling that way for many Canadians.” And indeed they go on to predict a hot summer in BC and possibly western Alberta, but a cooler summer in central Canada, especially Manitoba and Saskatchewan, a mix of warmer, cooler and normal in the Atlantic and some warmer and some normal temperatures in the North. (Unless it’s not, they add, since weather forecasting is uncertain.)

So where’s the continued increase in temperature that drives the skeptics into their dark holes? What if it doesn’t happen?

For decades alarmists were predicting increasing drought due to man-made climate change, including in the Canadian government’s 2001 Canada Action Plan climate change pamphlet. In 2016 Leonardo DiCaprio said California’s drought would not end. But a year later it did, and now the problem in the United States is that wet conditions are creating record delays in planting crops. What if it continues? What if the U.S. experiences partial crop failure due not to hot dry conditions but cold wet ones?

It’s a serious possibility. On Watts Up With That, guest blogger David Archibald produces a chilling warning, literally and figuratively, from the late Dan De Boer. As Archibald notes, American farmers are already having trouble getting crops in the ground because of too much rain not the fabled drought. And while the “extreme weather” trope might seem to explain the latter, the former, anything or nothing, Archibald says the last time these kinds of conditions existed was “during the 1970s cooling period associated with the weak Solar Cycle 20”. Then he quotes De Boer warning of “summer freezes in the corn belt in 2019 – 2020” and “summer freezes in all of the US in 2030-2031”. De Boer was one of those who thinks solar activity plays a huge role in temperature and temperature fluctuations.

Now it’s important to understand that, as we keep saying, climate is complicated. It could be that stronger and weaker solar cycles lay a warming and cooling cycle on top of some other secular or cyclical trend, so a less active sun could mask an underlying warming that then erupts with renewed fury when the sun becomes more active. But we won’t get anywhere unless we’re willing to look at data that seems to show some correlation between solar and temperature cycles. Or indeed at the thermometer.

What if warming doesn’t continue? What if we get a cooling trend lasting, at least, a few more years, as we’ve had since the 2016 peak? Will Climate Home News admit that there’s more room for debate? Or have the facts been driven into hiding?

2 comments on “Because we never used to have heat waves”